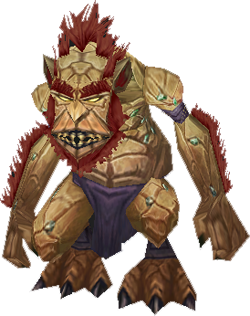 "Our war has been waged for longer than your kind counts time."
—Earthbreaker Dolomite[2]

Stone troggs (or rock troggs)[3] are the original form of troggs before the Curse of Flesh turned many of them into fleshy, mortal creatures. They were created by the Titanic Keepers through the Forge of Wills, but proved to be a failed prototype for the titan-forged.

These stone troggs, like the earthen, found their way into Deepholm through Uldum more than fifteen thousand years ago.[4] They've been warring against the earthen ever since, for thousands of years.[2] They often are found working with fungus.

Following their war with the Old Gods, the titan-forged keepers set to work creating a new generation of titan-forged by using the Forge of Wills. However, their initial designs proved too complex, and the result was a race of stone-skinned brutes known thereafter as "troggs". Distressed by the savage creatures, the keepers refined their design, resulting in the earthen race. The keepers could not bring themselves to destroy their already-existing defect creations, and instead the giantess Ironaya created the vault of Uldaman to serve as a stasis chamber for the troggs. However, some troggs later managed to escape the vault and began wandering the world.[5] One group somehow managed to make their way into Deepholm via Uldum more than fifteen thousand years ago.[5][4] These troggs were not afflicted by the Curse of Flesh, unlike their cousins on Azeroth, and are therefore known as stone troggs, the "true form" of troggs.[2]