Stoneclaw Totem is a totem. Shamans can drop it to take aggro from nearby mobs and occasionally stun them. It also protects all other totems by placing a protective shield on them. Combined with

[Glyph of Stoneclaw Totem], this totem plays an important role in PvP.

The totem is sometimes affectionately referred to as the "Angry Stick".

Talents that can improve the totem:

This totem is used to draw aggro from nearby mobs. However, the totem does not produce any damage to nearby mobs and enemy players - instead it pulses a weak aggro threat (weaker than taunting abilities) every 2 seconds. Since the totem lacks any damage output, it is very easy for any player to peel a mob from the totem with only using his/her auto-attack, and it is highly unlikely that the totem will regain aggro on its own. Thus, this totem is ill-suited for any type of aggro management during combat. Foolish shaman players never use this totem since they think it does not affect greatly the player's gameplay in different situations, however when you get an extra unexpected addition when fighting this totem is a reasonably form of temporary crowd control, providing a weak "offtank".

Some shaman players, however, do use this totem skillfully. Since it still has a weak aggro threat, it can still peel away the initial aggro from a mob that has not been engaged by any player. Also, the caster has to take into consideration that once the totem is destroyed by the mob(s) (like any other totem) they will instantly pursue the caster, unless the caster is out of their pursuit range before the totem dies.

In Patch 2.0.1, Stoneclaw was given a 50% chance of afflicting whatever hits it with a stun. The stun is initially a 3 second stun, but is affected by diminishing returns. The hit points of the totem were not increased with the patch, nor the duration, so it is unlikely that the totem survives long enough to make a target immune to further stuns. It should be noted, however, that Stoneclaw Effect shares a stun type with other stuns, so any stuns inflicted by the totem may limit other crowd control abilities substantially. 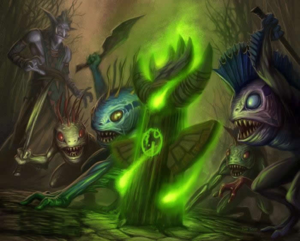 Stoneclaw Totem in the World of Warcraft Trading Card Game.