The Stonemaul clan[2] (or the Stonemaul Ogres) is an ogre clan which was allied with the orcs and, after the Second War, separated in two — one part sailing west to Kalimdor and establishing a village in Dustwallow Marsh[3] while the other remained in Lordaeron.[4] 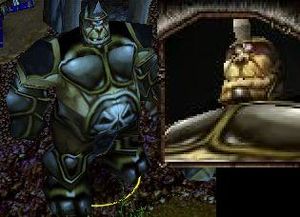 After the defeat of the Old Horde in the Second War, the ogre clans dispersed in all directions. While some escaped back through the Dark Portal into Draenor, other clans either remained in the Eastern Kingdoms or made the difficult journey across the ocean to Kalimdor.[5] For unknown reasons, the Stonemaul clan separated in two with one remaining in Lordaeron and the other journeying to Kalimdor and establishing themselves in the Dustwallow Marsh.

Members of the Eastern Kingdom's branch of the clan were roaming around the Ruins of Dalaran during the battle between night elves, blood elves and Illidan Stormrage's naga.[6] The Stonemaul in Lordaeron later found themselves involved in the between the self-styled Dark Lady Sylvanas Windrunner and the dreadlord Varimathras. Seeking to bolster her forces Sylvanas successfully had their leader Mug'thol possessed by a banshee and thus the clan declared their allegiance to Sylvanas.[7]

While the Stonemaul in Lordaeron fought against the enemies of the Dark Lady, the branch of the clan in Kalimdor fell under the control of Kor'gall, who had come into possession of the ancient orcish axe,

[Serathil], used its magical powers to seize power. Kor'gall's rise to power stemmed from nothing more than a desire to overpower his kin, and his rule was brutal and merciless, and one ogre, whose brothers were killed by Kor'gall, knew that he was leading the clan to ruin. He barely escaped with his life and sought any help he could. His quest would lead to him asking the Horde for help.[8]

Kor'gall was soon approached by Rexxar, a Mok'Nathal of the Horde. Rexxar demanded to join the clan, and Kor'gall agreed, but only if he were to pass through the Gauntlet, a valley full of many beasts and thus completing the Trial of Strength. Rexxar and his friends survived the Gauntlet, and Kor'gall was impressed and allowed Rexxar to join. Rexxar's first request was to aid the Horde, but Kor'gall had no intention of ever honoring their former allies again. Frustrated, Rexxar exercised his right to challenge Kor'gall for the leadership of the clan. Kor'gall decided to entertain the request but warned that he was not as slow-witted as Rexxar first guessed.

Though it took several tries, Rexxar finally beat Kor'gall and slew him in the Trial of Blood. As Kor'gall died, the last words on his ears were his men cheering for Rexxar. With his death, Rexxar assumed the position of chieftain. He then led the Stonemaul ogres back to Tidefury Cove, where Thrall was assembling the Horde. Thrall sent his soldiers and the Stonemaul ogres to Theramore to keep Proudmoore's forces at bay while Rexxar and his few companions wove through the battle to face off against Proudmoore and his most loyal retainers. In the end, Rexxar and Proudmoore squared off in mortal combat, and Rexxar emerged victorious. 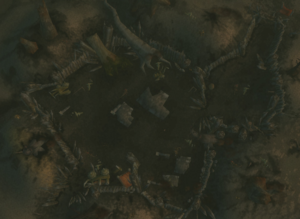 Stonemaul Village after being taken over by Onyxia's flight.

After the battle, Rexxar disappeared into the Barren wilderness and made the ogre Mok'Morokk the leader of the clan. Although Mok'Morokk had displayed strength when Rexxar was their leader, he soon fell prey to temptations of power after Rexxar's departure. Rather than lead, he demanded. He did not serve his people, as he expected them to serve him.

While the Kalimdor branch of the clan endured Mok'Morokk's leadership, Sylvanas would send Mug'thol and his ogres to retrieve the

[Crown of Will]. However, instead of bringing the crown to Sylvanas, he decided to try it on. The Crown of Will subsequently enabled him to free himself from the banshee's possession and he defected, establishing himself and his band of ogres in the ruins of Alterac as the Crushridge ogres.[9] 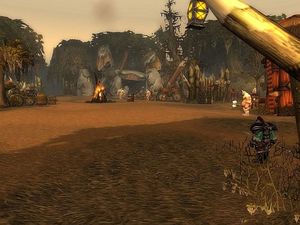 In time Stonemaul Village was raided by Onyxia's brood. The daughter of the black dragonlord, Deathwing, was there for a greater reason — one which they didn't know.

When the black dragonflight attacked them in Stonemaul Village, Mok'Morokk led the clan to Brackenwall Village. While some expected that the ogres would take an action against the dragons, no counterattack happened.[10] He ruled until an adventurer of the Horde drove him out and he fled. The clan now seeks a new leader. Draz'Zilb who orchestrated the attack hinted that Tharg could be a leader but is hindered by his injuries and age.[11] 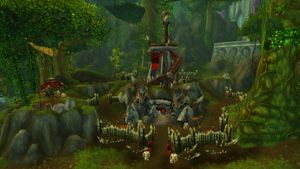 During the Cataclysm, the Stonemaul clan has expanded into Feralas and set up a base of operations in western Feralas, near Dire Maul, called Stonemaul Hold. The Stonemaul are helping the Horde in dealing with the local population of hostile ogres in the region under the command of Orhan Ogreblade.

The Stonemaul clan from Brackenwall joined Warchief Garrosh Hellscream's forces in the Attack on Theramore Isle.[12]

During the Pandaria's Campaign, the Stonemaul within Brackenwall Village sent Or'Dac as emissary to support the Horde's influence in Pandaria.

Rexxar taking over the clan.

Most ogres are savage and evil, as unruly as any forest troll. However, the Stonemaul clan defies this mold, and exists in a lawful and semi-democratic society. They perform trials to decide anything from a new leader to going to war, and have willingly joined the Horde. Unlike the wild and uncontrollable clans elsewhere on Azeroth, the Stonemaul ogres are tightly organized, following a specific hierarchy of power.

When Rexxar departed and appointed Mok'Morokk as chieftain, Onyxia laid waste to their home. In the meantime, Draz'Zilb uses the clan's few remaining resources to investigate why Onyxia attacked them in the first place. The bottom line here is that the Stonemaul clan is no longer in any condition to support the Horde on the battlefield. A number of ogres survived Onyxia's attacks, but they are disorganized and fight among themselves.

Stonemaul ogres have no chieftain at the moment, and a consensus of the eldest ogres of the clan makes most of the Stonemauls' decisions, along with words of advice from Horde emissaries and counselors.[14]