For the lore of the zone and its status after the Cataclysm, see Stonetalon Mountains.

The Stonetalon Mountains, aka Stonetalons, are a range of peaks that lie west of the Barrens, south of Ashenvale, and north of Desolace. The mountains are traditionally the homeland of the harpies, but their numbers have dwindled as the bird-women spread east and south. Stonetalon Peak, the largest mountain in the range, has long been a sacred place for both the night elves and tauren. The night elves maintain a barrow and a glade at the top, where they commune regularly with the spirits of nature. The mountains further south are less forested, although some sparse evergreens grow in certain spots, particularly the Greatwood Vale. The Venture Company have put a heavy toll on the land, cutting down almost all the trees in Windshear Crag and filling the air with soot, spoiling the area's water with oil and waste much to the fury of the orcs and tauren. The tauren have a holding in the centrally located Sun Rock Retreat and the Darkspear trolls have a settlement further south at Malaka'jin. The mountains are also home to kobolds, spiders, and wyverns, while Charred Vale holds several especially dangerous kinds of beasts and elementals.

The Stonetalon Mountains were once a low set of hills giving a gentle view to the ocean waves in the west. The Sundering that tore apart the world drove great sandstone cliffs and mountain peaks high in the air. Water from the eastern coast poured into the newly created chasms and gorges. With the aid of erosion from the Blackwolf River, the Stonetalon Mountains have expanded into a vast network of canyons and cliff openings that invites adventurers and beasts alike to explore the virgin lands. The Stonetalons rise in central Kalimdor, south of Ashenvale Forest and north of Desolace. The mountain range feeds into the bleak expanse of the Barrens to the east. The atmosphere of the Stonetalon Mountains can best be described as extreme. At the lower elevations it is windy, hot, and dry. It is a harsh place where food cannot grow and flash floods are commonplace in the early summer months. Moisture from the ocean builds up into huge rain clouds, but the towering peaks are too high for the clouds to pass inland. They crash against the mountains’ western side and pour massive sheets of water upon the slopes to run through narrow canyons and back into the ocean or into a valley to dry up in a marshy sink. When the weather turns to rain, the ground grows slick and gray. Walking on a slope or a cliff in the rain is treacherous — water seeps through the sandstone and threatens to send even careful travelers plummeting to their deaths. Oftentimes, when the clouds expel all their moisture, hot winds push them farther up the slope, surrounding the Stonetalon Peak in a shroud of thundering mist. An immediate feature any visitor notices — aside from the sheer cliffs and deep crevasses - is the constantly blowing wind. Sometimes a gentle breeze carries fresh air in from the ocean and other times a violent gale stirs up vicious dust devils or brings a storm in from the western mountains. The rugged mountains are home to many wild beasts and only a few civilized habitations. Hippogryphs roost near Mirkfallon Lake in cave complexes high on the slopes. Their nests are defended by large bramble hedgerows, making access nearly impossible without flying. Other creatures found throughout the mountains are striders, hyenas, kobolds, swoops, crag panthers, and even rock elementals and the rare sabertooth cat.

Further up the Stonetalon Peak, on its eastern side, are the chaotic lands of the wyverns and drakes. These ancient “flying lizards” have long been rivals for supremacy of the skies. Every once in a while, when other races threaten to interfere, the two will set aside their differences long enough to deal with the interlopers. Agents of the goblin-run Venture Company have also been sighted in the area, searching for potential tracts to deforest and streams of precious ore to plunder with their mining machines. The mountains are known for their Ill Winds. The winds whip through the Stonetalon Mountains with great force, slowing travelers' progress and throwing up clouds of grit and dust that can confuse the best sense of direction. Small and lightly built individuals have even been flung off a mountainside by a particularly forceful gust. The wind in Stonetalons seldom drops below moderate even on a calm day and can change from a steady breeze to a brutal windstorm without warning.[1]

Stonetalon Mountains have traditionally been the area of Kalimdor where night elves and tauren coexist and forms a border between the two peoples. Stonetalon Peak has long been a sacred place for the two races, and was historically the home of the immortal Oracle, the being who saw the strands of fate as they were woven by the Earth Mother. During the Third War, the mountains hosted human and orcish camps, and it was at Stonetalon Peak that the Alliance and the Horde temporarily united in order to fight the Burning Legion.

The normal questing experience for both factions guides them into Stonetalon through Talondeep Pass in the mountains in southwestern Ashenvale. 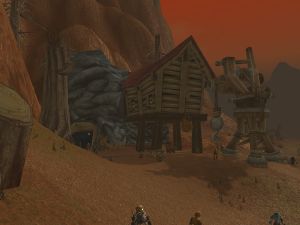 The Stonetalon Mountains lie between the forests of Ashenvale to the north and the bleak Desolace to the south west. The highest peaks of the mountains are thickly forested with evergreens, though the forest thins with lower altitude. The logging of the Venture Company has also further thinned the forest, with clear cutting in and around Windshear Crag. The mountains boast a lake known as Mirkfallon Lake, around which wyverns make their nests. Charred Vale, once a lush and beautiful area, is now a desolate ruin full of fire elementals.

There are no instanced dungeons nor PvP battlegrounds in the Stonetalon Mountains. The micro dungeon Talon Den can be found here. Travel hubs include Sun Rock Retreat for the Horde and Stonetalon Peak for the Alliance. 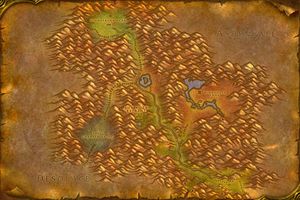 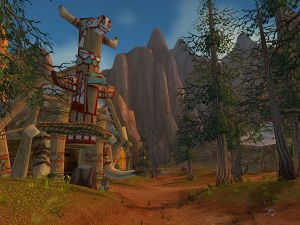 Both Horde and Alliance have travel hubs in the Stonetalon Mountains, at Sun Rock Retreat and Stonetalon Peak, respectively. 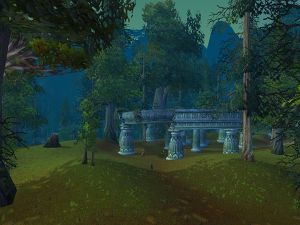 Stonetalon Mountains are home to several characters of note. At Sun Rock Retreat, Braelyn Firehand seeks to employ Horde adventurers in her quest to staunch the chokehold the dryads and night elven druids have put upon the area. Other NPCs in Sun Rock send Horde players to battle against the harpies in the Charred Vale. The Grimtotem clan of renegade tauren have seized a village near the border of the Barrens and taken a few hostages. At Windshear Crag, Ziz Fizziks aims to strike directly at the heart of Venture Company's local team — the leprous gnome Gerenzo Wrenchwhistle. And in a small camp nearby, Kaela Shadowspear and Gaxim Rustfizzle organize the Alliance's opposition in the rugged crags, with particular aims at the nearby goblin invaders and the monsters of the Charred Vale. At the very border of Stonetalon and the Barrens, two Horde NPCs send you into Windshear Crag with similar intentions as Kaela and Gaxim.

Both Horde and Alliance quests in the Stonetalon Mountains revolve around driving out the Venture Company presence and restoring the area, including the Charred Vale. In addition, each faction has a few quests to interfere with the other. Quests in the area range from level 25 to level 30. 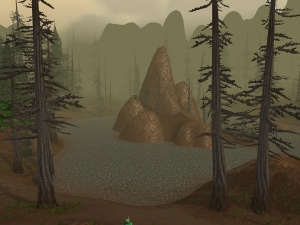 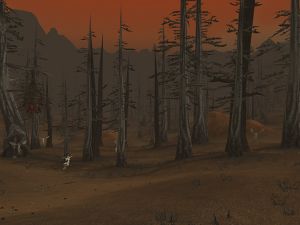