For other uses, see Stonetalon Pass. 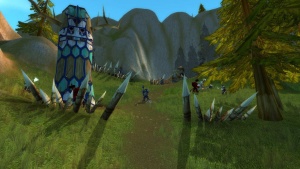 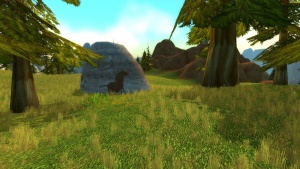 Stonetalon Pass is a small quest area where Horde players battle the Grimtotem. It is located to the northwest of Thunder Bluff in Mulgore. The path ends at a painted rock on a high plateau.

However, intrepid explorers can fall to Boulderslide Ravine or Malaka'jin in Stonetalon Mountains if they head northeast (almost due east) from the top of the path. Walking along the rim of Mulgore can get one to the High Road, used by Horde players to travel between Stonetalon and the Southern Barrens while skirting the Alliance forces at Honor's Stand.

The Grimtotem have appeared to build up a small settlement here, it's possible this is where they traveled to when exiled from Thunder Bluff.