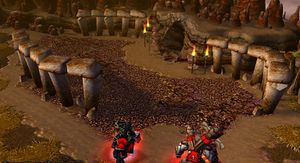 The entrance to the caverns of Stonetalon Peak. 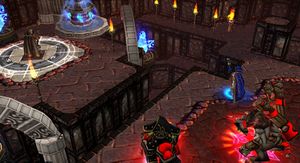 The area where Medivh resided.

The caverns of Stonetalon Peak located atop the Stonetalon Mountains were the caves that The Oracle, chapter 7 of the Warcraft III orc campaign, The Invasion of Kalimdor, took place in.[1]

Thrall learned from Cairne Bloodhoof about an Oracle to the north that may be able to help him.[2] When Thrall got to Stonetalon Peak, he found that the humans of the Human Expedition had secured the entrance to the caves that contained the Oracle, and had entered it.[3]

The caverns split into two directions; Thrall went one way, Cairne went another.[1]

The section of the caverns that Thrall journeyed through were seemingly artificial and built like a dungeon. A faction called the "Ancient Dead" stood guard. After fighting through the caverns, Thrall came across a room with a statue of Aszune. Aszune would not lower a barrier that was blocking passage to the Oracle unless her heart was returned to her. Thrall eventually returned her heart, after finding her heart on a red dragon that was beset by harpies, and the barrier was lowered. However, a bridge of energy also required to continue further was not functioning. Thrall hoped that Cairne would find the gemstone required to activate it.[1]

The section of the caverns that Cairne journeyed through were seemingly natural, albeit with some artificial mechanisms, such as hellish spiked pits. After fighting through the caves and retrieving the Enchanted Gemstone, known as the spirit of Stonetalon Chasm, Cairne fought through a hallway of animated suits of armor, and found Thrall. With both parties' combined efforts, the made their way to the Oracle's chamber, where the orcs and their allies found Jaina Proudmoore, and that the Oracle was the Prophet, Medivh.[1]

The peak is highest point in the mountain range. It was actually made hollow with numerous eruptions in the great Sundering. The caves have become home to several wayward beasts, which gain entrance through an opening in the south. The Horde knows of their leader Thrall's passage through the legendary caves, but he explored only one of the many twisting routes of empty lava tubes that fill Stonetalon Peak.[4]

According to Mor'rogal there is something evil under the Stonetalon mountains.[5] It may be located in the cavern.