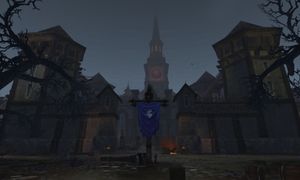 Stoneward Prison (as seen in the Ruins of Gilneas, with a Forsaken banner).

Stoneward Prison (or Gilneas City Prison)[1] is a fortified prison complex located in the Military District of Gilneas City.

After being arrested for his insurrection against King Genn Greymane, Lord Darius Crowley was held in Stoneward Prison until towards the end of the Northgate Rebellion, when the worgen began to run rampant in Gilneas. In

[5] Old Divisions, King Greymane sends Gilnean adventurers to the prison to free Lord Crowley and secure his assistance in fighting off the worgen onslaught.

After Gilneas fell to the Forsaken, the prison courtyard was used to store parts for abominations. Gorerot, a massive flesh beast created by the Forsaken to fight off the Gilneans, was fought and destroyed here.

At some point during the beginning of the Silverpine Forest storyline, the Gilneans (reinforced with their new Bloodfang allies and 7th Legion support) had retaken much of the city. While it is not featured during the later areas of the quest chain when venturing into Gilneas, it is safe to assume that the Military district and as such the Stoneward Prison (along with the rest of the city) is occupied by Alliance forces.[citation needed]

This is further reinforced by the presence of the Blackhowl, a group of Gilneans who serve Lord Hiram Creed, a black drakonid in disguise as an affluent Gilnean noble who is subverting the Gilneans under his command. The Blackhowl occupy most of the city, specifically the Merchant and Military districts, Lord Creed making his abode within the courtyard of the Prison, where it is apparent that Forsaken assassins have failed at killing him.