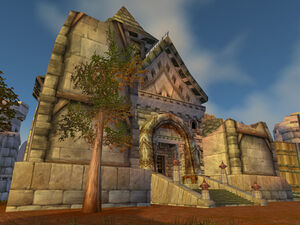 Stonewatch Keep is the main structure of the human stronghold of Stonewatch, which also includes the Stonewatch Tower. Originally, Stonewatch used to be controlled by the humans of Lakeshire. One day however, the warlock Morganth made an alliance with the Blackrock orcs led by Gath'Ilzogg, and together they combined their forces to invade Redridge. Fueled by the evil magic of Morganth, the Blackrock orcs attacked Stonewatch Keep in Redridge with horrific savagery. Ultimately, they captured Stonewatch Keep, but shortly after their victory, Morganth turned on his orcish cohorts. He constructed an arcane tower, the Tower of Ilgalar, and used his powers to build a small army of Shadowhide gnolls led by Lieutenant Fangore, to serve his malicious bidding. Both orc and man have fallen victim to the brutes that serve Morganth.[1]

Left to fend for themselves, the orcs of the Blackrock clan maintained control of the keep, which was overseen by the Blackrock warlord Gath'Ilzogg and his trusted lieutenant, Tharil'zun.

Magistrate Solomon put a bounty on Gath'Ilzogg[2] while Marshal Marris of Lakeshire enlisted the aid of Alliance adventurers to hunt down and kill Tharil'zun for his misdeeds.[3]

After the Cataclysm, both Tharil'zun and Gath'Ilzogg returned as death knights and have continued the Dark Horde's campaign to conquer Redridge under the leadership of Darkblaze. The two death knights were holed up in Stonewatch and Colonel Troteman ordered Bravo Company to carry out their execution.[4] Shortly after their defeat, Bravo Company had to face the black dragon Darkblaze himself.[5] After defeating Darkblaze, all orcish forces appear to have abandoned Stonewatch.