Stood in the Fire

Stood in the Fire is a exploration achievement earned for being killed by Deathwing, either at random in the world, or in the two encounters with him in the Dragon Soul raid (Spine of Deathwing and Madness of Deathwing).

The act of which time and zone he will spawn seems to be completely random, and is not affected by any zones or times he's spawned at previously. Thus, there is no way to determine ahead of time when a zone will be hit. It's not unheard of for some servers to see Deathwing scorch one zone countless times while other zones on the same server have yet to be touched. 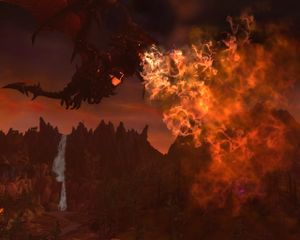 Deathwing will spawn at a random time and zone, and any zone in Kalimdor and the Eastern Kingdoms outside of the starting zones and the capital cities is fair game. When he spawns, the sky and surroundings will become dark and blood red (not to be confused with some zone areas in which the sky can also become red, such as when Sentinel Hill in Westfall is being burned after a phase change; a player will be able to tell point blank when Deathwing has entered the zone because, if they are close enough, of a yell that will appear in the chat log when he spawns).

He appears to cut a swath across the zone in a mostly straight line with perhaps a turn to accommodate the zone, swinging his head side to side to spew Molten Flame and kill anything in his path. Not everything in the zone will die, only those in his line of fire. Players killed will not lose durability. If a player is on a flight path and has the misfortune (or fortune for those that are looking for the achievement) of flying into Deathwing's path they will receive the achievement, but rather than die, be reduced to 1 hit point. The taxi will continue along its regularly scheduled route.

There have been players that did not get the achievement because they were indoors during the event. Also, there is an understood bug in which players were killed, but did not receive the achievement. If the latter happens, players are being asked to open a ticket to have Blizzard correct the situation.

From various player reports and posts, Deathwing's path is not randomized and is a set course in each zone. Therefore, there are places that players can wait at which, should Deathwing spawn, guarantees them the achievement. Sometimes a zone can be hit twice in one day.

A hunter, once in close visual range of Deathwing, tried to keep up with him and could not, even with Master Riding and full

The name of the achievement is a reference to "standing in the fire", a popular phrase describing the act of not moving out of the way of negative debuffs in boss encounters that is a obvious clue that a detrimental act is in effect.