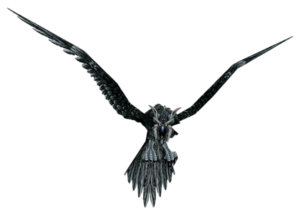 Storm crows (or stormcrows)[1] are a species of crows found on Azeroth. They are sometimes summoned by Druids of the Talon.

The name is likely inspired by Lord of the Rings, in which Gandalf is addressed as "Storm Crow" as an insult due to his habit of bringing bad news.

The term itself is a nickname of the yellow-billed cuckoo, which often crows on warm humid days before a thunderstorm arrives. Note however that the cuckoo bears no resemblance to a crow.

Their habits are much like that of their lesser brethren, but their size and speed earns them special regard. Superstitions say that seeing a solitary storm crow flying across the sky above the horizon means that a great storm is on its way. Storm crows are most famous for the fact that druids can take their shape. They are not brave, so any serious injury to a fellow crow causes them to break off. Storm crows are one of the animals that druids take as companions. Their call sounds more like a loud crow than a raven. Crows in temperate zones and raven in cold climes are under some competition with storm crows, but are not completely shouldered out.[2][3]

Storm crows resemble ravens or common crows, but are far larger, averaging 3 to 4 feet in height, though their frames remain slight. They have a wingspan of 10 feet.[2][3]

A murder (a group usually ranging from 2 - 8 storm crows) of storm crows controls a rough territory and will kill any other storm crows that wander in. They also have no problem eating their own dead. In the winter, several groups will assemble into large roosts of 30 - 40. Storm crows, however, are more likely to be solitary than other crows; these solitary birds may wander great distances.[3]

Like most crows, storm crows are omnivorous and they feed on carrion, fruit, and the occasional insect; they rarely attack large, live prey. If they do, several storm crows fly around a target, pecking and clawing before wheeling away. Storm crows hunt by sending one or two members to inspect the situation, who attempt to grab the food while the others wait. If all is safe, the entire group descends. In Mulgore, kodo beasts' nests are particular targets. Much of the murder will caw and raise a commotion above the kodo beasts' heads while one or two storm crows try to grab the eggs and fly away. As with most birds, storm crows have a very limited sense of smell. Those dwelling in Ashenvale often hunt other birds to tide them over until they can spot a large kill. Then they will cry loudly and sometimes many dozens of storm crow will gather to eat.[2][3]

Storm crows occasionally nest near settlements, eager for opportunities. Scraps of food, young livestock, eggs, and sometimes young children may become targets. Several storm crows will fly around a target, pecking and clawing before wheeling away. They are not brave, and any serious injury to their members will cause them to break off.[3]