From Wowpedia
(Redirected from Storm dragonflight)
Jump to: navigation, search

For the storm dragons of Skywall, see Storm dragon. 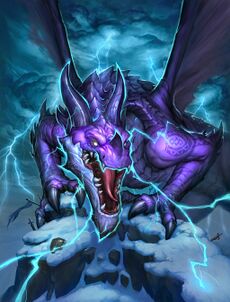 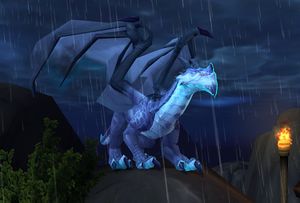 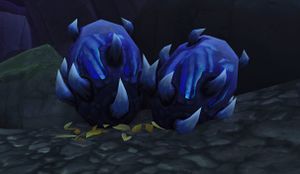 Eggs of the storm drakes.

The storm drakes[1][2][3][4] or storm dragons[5][6] are dragons possessing the power of the storms and who make their lairs in the mountain peaks of both Stormheim and Suramar.[5]

Havi described the storm dragons as being "born of the gods".[7] Long ago, the Thorignir brood of storm dragons swore fealty to the titan keepers. The great Nithogg did not agree with that decision and refused to be their subject, believing that one day he would be more powerful than even the keepers. Instead, he took up roost in the mountain Nastrondir, where he raised his brood and terrorized the nearby lands.[8] Hakkap One-leg was the first vrykul who learned to tame the storm drakes of Stormheim.[9] Storm dragons play a large role in the Stormheim storyline.

The storm dragons of Stormheim are associated with thunder and lightning. They are as intelligent as the other, more well-known dragons encountered so far. Most, if not all, storm dragons appear to be capable of speech[10] and the Thorignir brood presides over the Trial of Will to determine the worth of those who seek the Aegis of Aggramar.[11] Storm dragons normally live in colonies.[12] Storm dragon whelplings hunger for the flesh of animals, but the young ones cannot stomach it raw. Cooking the meat from their corpses with lightning allows the whelps to consume it.[13]

There are several identified broods of storm dragons within Stormheim:

The description of the

[Island Thunderscale] says that it is a "native" dragon species. That and the fact that the Thorignir brood swore fealty to the titan keepers may imply that the storm drakes existed before that some of the elementals who avoided imprisonment eventually transformed into proto-dragons.