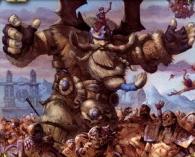 Storm giants are titan-forged giants who were afflicted with the Curse of Flesh. They are found in Northrend and are led by King Gymer. However, the storm giants were recently decimated by the Lich King, who had the Scourge raise them back into undeath, or use their corpses to create mindless flesh giants. They were also used to create the stitched-together aberration known as Thrym.[1]

Gymer, King of the storm giants, was lured into a trap by his brother, Thiassi the Lightning Bringer, who had become an undead servant of the Lich King. By the time he realized that his cry for help was a trap, it was too late. Gymer became a prisoner of the Scourge and he feared that he would soon suffer the same fate as many of the other storm giants.[2]

Tortured endlessly, he was found by an adventurer who found him in a hundred foot tall cage. The giant trusted the tiny figure for they did not reek of ancient death like the others. Returning to Engineer Reed, the human thought that he and the adventurer could do something to help, and that the giant was the only way they could stop Navarius and his Scourge activities.[2]

Reed believed that they would be able to at least weaken the hinges on the cage, giving the giant enough leeway to break out, but they needed plasticizers and stabilizers. The adventurer collected Banshee essence for the plasticizers, and found the stabilizers on earth elementals. Reed then put together the jumbo seaforium charge with the materials and made explosives out of them.[3]

Seaforium is a highly volatile explosive with some unique properties. Due to its malleable nature, the adventurer was able to fill in the hinges and cracks of the cage for maximum damage.[4] Gymer freed, the giant explained what had happened to him and his people. He took the adventurer upon his shoulders, and - in an act of vengeance - went to war with the Scourge, alone. Gymer wanted to destroy the Scourge that threatened Zul'Drak.[1]

The colossal giant killed hundreds of undead and decimated the Scourge's entire army there, including Thrym the aberration, Prince Navarius and Algar the Chosen.[1]

Storm giants are a mysterious race of giants that once resided in the Storm Peaks of Northrend. They were in charge of the crystalline golems that collect crystals from the Crystalsong Forest.[5]

They are impressive, more than 30 feet tall and powerfully built. Storm giants are capable of summoning small storms. Myths say the titans created them. When the titans disappeared, the storm giants remained and claimed Ulduar. They developed crystalline golems to aid them in their research and to defend them. Over time the giants dwindled in number and grew ever more reclusive. They usually kept to themselves, hidden in their caves and tunnels below the surface, and avoided visitors. Soon only a handful remained. The giants are a dying race desperately trying to avoid their fate. They seemed to think another race would vanquish them some day, and so they hid in the Storm Peaks and Ulduar rather than girding for battle. They are too frightened to battle the Scourge, though apparently they hate it.[6] Some resided in the Temple of Storms.[7]