Stormfury, Black Blade of the Betrayer 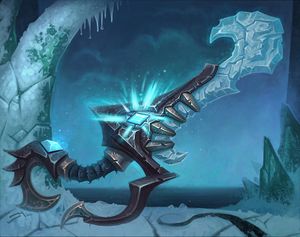 Stormfury, Black Blade of the Betrayer in the TCG.

This item drops from the Lich King in the 10-man version of Icecrown Citadel.

This item is believed to be a weapon of Illidan Stormrage once (Illidan was, and still is, considered a prime example of a Betrayer, also note the similarity between 'Stormfury' and Illidan's surname Stormrage). Arthas probably got this dagger after he bested Illidan in combat in front of the Frozen Throne's gates, but that raises the question why Illidan carried Stormfury with him, as he was only wielding the The Twin Blades of Azzinoth before and during the duel. It is possible that Illidan left the dagger behind after the failed campaign in Northrend, and The Lich King later claimed it as his own.