For the tauren, see Stormhoof (tauren). 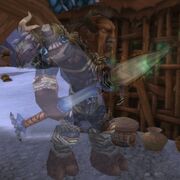 Stormhoof was a taunka who lived hundreds of years before the present in Camp Tunka'lo, high in the Storm Peaks. He was the brother of Swiftspear, the chieftain of the tribe. He is revered as a hero by the taunka for battling their ancient enemy, the North Wind.

Seeking to end the North Wind's dominance, Stormhoof faced the element on the Plain of Echoes near Tunka'lo and at the cost of his life severely weakened it. However, the North Wind was not destroyed, and spent hundreds of years gathering its power before taking its revenge - by changing the course of history itself and making Stormhoof to appear as a servile insurrectionist, rather than a liberator. This change was unnoticed by the people of Tunka'lo, but it gained the suspicion of Xarantaur the Witness, one of the first tauren druids trained by Cenarius himself, who had been told the story of Stormhoof at Taunka'le Village in the Borean Tundra...and found that Tunka'lo's history did not reflect what he had heard.

Xarantaur, blessed with immortality by the bronze dragon Aspect Nozdormu, had been granted an artifact known as the Lorehammer by the Lord of Time. He tasked adventurers with discovering the truth behind the two conflicting stories and discovered that the North Wind itself was responsible. With the power of the Lorehammer, Xarantaur sent the adventurer back in time to Stormhoof's battle with the North Wind, where they would play the part of Stormhoof in his battle against the evil element. As before, Stormhoof fell in the battle, having weakened his enemy. However, the adventurer picked up the Horn of Elemental Fury dropped by the hero and blew a mighty blast that destroyed the North Wind once and for all.

With history set back to normal again, the adventurer returns to the present and meets the spirit of Stormhoof in Tunka'lo - having ensured that the hero's story would not be forgotten.

Current location of the Horn

According to another legend,[1] possibly modified by the North Wind, the horn was taken back from Stormhoof by the Wind, which then split it in half and gave it to two gorlocs to guard. The horn is reassembled by an adventurer in the Borean Tundra to repel the nerubians and save the taunka of Taunka'le Village.