Not to be confused with Barrow Deeps. 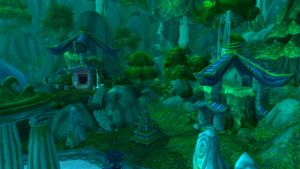 The Stormrage Barrow Dens are the sacred barrow dens of the Moonglade where many of the nightelven druids slumber in the Emerald Dream. The great druid Malfurion Stormrage, for whom the barrow dens are named, used to slumber deep within the dens. Clintar Dreamwalker now sleeps here.

Directly north of the barrow dens are Minions of Omen, high level wolf-like creatures. They only come out at night during the Lunar Festival. A part of the Moonkin Festival also occurs here. 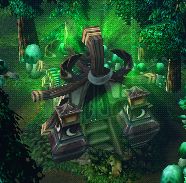 The dens in Warcraft III.

During the Third War, Malfurion Stormrage was sleeping in his barrow den which was almost destroyed by the Dreadlord Tichondrius' forces. Malfurion was awakened by Tyrande Whisperwind to help fight Archimonde's forces.[1]

At some point after the Third War, and the discussions about planting the second World Tree, Malfurion arrived here to meditate. Tyrande later arrived here to find his body in a coma. When they were not able to help him, the Cenarion Circle decided that it would be best to leave Malfurion's body where it was found, in his barrow den in the Moonglade. The general consensus was that Malfurion's spirit had the best chance of locating his body if the body was not moved. The body remained there for several years under the care of the Circle and the Sisterhood of Elune until the War Against the Nightmare.[2][3]

One of the barrow dens was overrun by Nightmare creatures. Heroes entered the corrupted den to cleanse it and seek out how to acquire the

Due to potent tremors emanating from the Emerald Dream, Malfurion and Keeper Remulos, with the help of a druid hero and several powerful druids, opened a portal to the Emerald Dreamway to seek the aid of their brethren at the Dreamgrove in Val'sharah.

The Stormrage Barrow Dens are protected by a group of night elven Sentinel guards who do not allow entrance. The Sentinels here are frustrated and uncertain, probably because they have the unenviable duty of guarding against an invisible attacker — whatever severed Malfurion Stormrage from his physical form must be one of the most powerful entities in the world, and that probably does not sit well with anyone. These dens might have a large number of resting druids.[4]

The Barrow Dens are located on the north-eastern corner of the Moonglade. This area is sacred to the druids and was also formerly the home of the late demigod Cenarius. The Barrow Dens are an ancient underground fortress, with passages and caves containing the living and working chambers for the druids of the wild. The dome in the center of the hill holds Cenarius' Lair, now a shrine to the valiant demigod.[5]