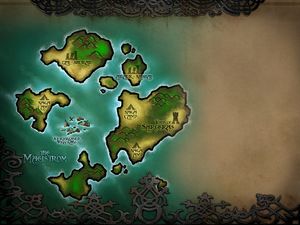 The Stormreaver Wreckage in Warcraft III.

The Stormreaver Wreckage is the name of a location in the body of water in between the Broken Isles. As seen on the map, it is filled with the wreckage of the ill-fated fleets of the Stormreaver clan.

Stormreaver Bay is a natural bay found between the southwestern islands of the Broken Isles, and it boasts a bit of history. Gul'dan anchored his ships here when he was exploring the isles. The ships are long smashed, but their remains still drift in the aptly-named bay.[1]