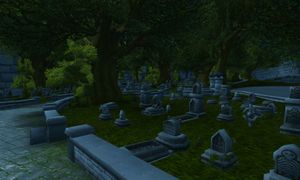 The Stormwind City Cemetery (or Stormwind Cemetary)[1] is a large graveyard located to the north of Cathedral Square, nestled on the edge of Stormwind Lake. It contains a large number of graves and also a tomb very similar to Uther's Tomb.

Among those buried there is Queen Tiffin Wrynn, wife of King Varian. Another one who is known to be buried here is Sir Nicholas Gabaree.

The tomb has no statue or plaque indicating who is buried there. A popular fan theory is that this tomb holds the corpse of Arthas Menethil, which would explain why it contains the Lordaeron symbol. When this was asked at Blizzcon 2011, Chris Metzen said he's not sure if that's true or not, but it is an interesting idea.

It's possible it may have been intended for Varian himself when he dies, given its proximity to the grave of his wife. However, if so it'd be off for him to be buried in a grave with a Lordaeron symbol instead of a Stormwind symbol. Whether that was the plan or not, Varian was ultimately given Lion's Rest as his memorial instead.

Alternatively, it could also be the tomb, where Anduin Lothar is buried. A Lordaeron symbol could be a symbolic representation of how Lothar was a Supreme Commander of the Alliance of Lordaeron.