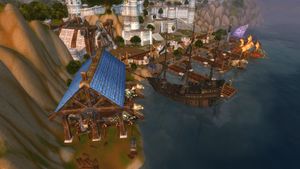 Stormwind Harbor is a large port and shipyard, consisting of a series of wharfs, dry docks, and fortifications located in the northwestern area of Stormwind City, with the access point set between the Park and Cathedral Square districts. The harbor serves as a major strategic base for both the Kingdom of Stormwind and the Alliance. Here, many Alliance warships are constructed and fleets assembled; it is likely the largest and most important Alliance naval base in the Great Sea and potentially beyond. From a civilian perspective, transport ships regularly sail from the harbor to numerous other destinations across Azeroth, such as Rut'theran Village in Kalimdor, and Valiance Keep in Northrend.

The harbor is heavily fortified to protect against attack, presumably by the Horde, whose navy is also known to operate off the western coast of the Eastern Kingdoms.[1] To this end, there are numerous tiered plateaus leading from the harbor up to the city proper, upon which are stationed articles of heavy artillery in the form of cannons (whether on the ground or mounted in towers). Additionally, on the harbor's lower tiers, numerous ballistae and steam tanks can be found aimed out to sea.

Stormwind Harbor was in existence at least by the time of the First War. When the Old Horde sacked the city, Anduin Lothar covered the survivors' retreat to the harbor, from where they set sail for Lordaeron, destroying most of the remaining boats to prevent the Horde from following them.[2] 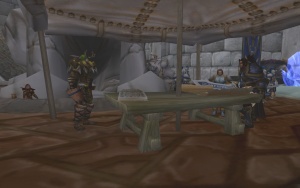 Immediately proceeding the commencement of the War against the Lich King, Stormwind Harbor was preemptively attacked by Scourge forces, including Frost wyrms and abominations. The Alliance command, including King Varian Wrynn and Highlord Bolvar Fordragon, was set up on top of the harbor's walls, overlooking the battle below. The units consisted of members of the Stormwind Harbor Guards.

During the Elemental Unrest, Twilight's Hammer units were seen at the harbor.

Following the annihilation of Theramore at the hands of Warchief Garrosh Hellscream and the Horde, a large Alliance fleet under the command of King Varian Wrynn set sail from Stormwind Harbor with the intention of launching an assault on the Orc city of Orgrimmar in response.

Following the conclusion of the battle and the subsequent destruction of much of the fleet, it is revealed that a new armada is under construction in the harbor, the designers utilizing new and improved techniques to ensure the new ships are even better than before.

During the final battle with Garrosh Hellscream in the Siege of Orgrimmar (on heroic mode), the Heart of Y'Shaarj notably transported Garrosh's adversaries to Stormwind Harbor. This version of the harbor, however, proved to be one in a dystopian future, where the True Horde has succeeded in overwhelming all opposition, with Stormwind and its harbor in ruins.

[Vision of Time] also grants a vision of the ruined harbor in a possible future. In this reality, the remaining leaders of the coalition against Garrosh have made their final stand in the harbor and can be seen impaled on stakes adorning the harbor's main promenade.

Stormwind Harbor is the launching point for the Alliance forces sent to attack the Broken Shore. Accepting

[98] The Legion Returns puts the player into a phased version of the harbor, where the weather is always rainy and gloomy. Ships, soldiers, siege weapons and flying machines are being prepared by all the races of the Alliance. Several things can be seen there:

Please add any available information to this section.
After the Burning of Teldrassil, many night elf and worgen refugees found haven in Stormwind and can be found on and near the northern dock. The ship to Rut'theran Village was retired, with a new ship to Boralus in Kul Tiras taking its place. 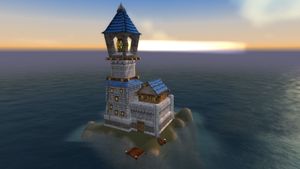 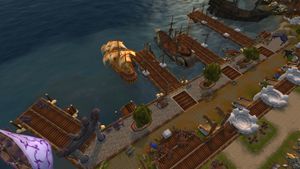 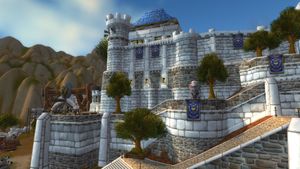 The fortress has a commanding view of the entire harbor

Stormwind Harbor contains several wharfs and jetties protruding into the bay. It is from these that the ships entering and leaving the harbor dock and launch from. The wharfs serve both a civilian and military function, as vessels associated with both are known to regularly make use of them. Notably, the southernmost dock appears to be both operated and guarded by Darnassus, it serving as the link between the human and night elf capitals.

The contents behind the large gate in the harbor, which is located on its northern face, is currently unknown. Due to the similarity it shares with hangers, it is possible that it is used to build or house Alliance gunships. This is also supported by the fact that there are currently no known locations where these airships are made, despite the Alliance possessing at least several of them. Whatever is truly behind the gate, it must be of some great import or value, judging by its impressive security.

The harbor is also home to a set of dry docks. These docks are responsible for the creation and maintenance of warships in the Alliance navy and can be found in the harbor's northwest, near to the lighthouse. The docks appear to be currently specializing in dealing with the powerful Icebreaker class of destroyers, which were first used in the campaign in Northrend.

As part of the harbor's potent defenses, a fortress is located at the highest tier, with a commanding view of the entire port. it is located on the edge of the Stormwind City Cemetery and boasts a range of cannons protruding from its interior. Similar to the other fortifications, the fortress' primary function appears to be to ward off any assault on the harbor - or the city - from the sea, although it may also function as a guardhouse for the harbor guards. 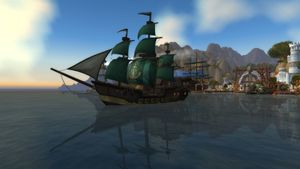 A ship pulls out of the harbor, bound for Kul Tiras

Rut'theran Village from southern dock (before Burning of Teldrassil)

Boralus from southern dock (after Burning of Teldrassil)

Note: During the quest

[81] Call of Duty, the boat to Valiance Keep is phased out and inaccessible, replaced with the mercenary ship going to Vashj'ir. If you need a ride to Valiance Keep, either complete the Vashj'ir quest first, or abandon it and reaccept it later.

Darkshore from southern dock (after Burning of Teldrassil)