The mighty Stormwind Keep[1][2] (also called Stonewind Keep,[3] Castle Stormwind,[2] stronghold of Stormwind,[4] Stormwind Castle,[5][6] and after its reconstruction sometimes referred as Castle of New Stormwind[7][8]) is the seat of power of the human kingdom of Stormwind. This keep is the residence of the Stormwindian kings, currently King Anduin Wrynn. Some of the nobles of the kingdom are also here.

The Keep offers a view of the whole city, so that the king can watch over the masses, and provide a powerful reminder of what deserves to be defended. Citizens make good use of the garden and the Royal Library, strolling the grounds and reading, and it has private areas - the king's rooms, guest quarters for prominent visitors, and a small royal armory for extremely rare pieces. The keep has fiercely devoted guards but also a considerable number of agents, posing as lesser noblemen or servants to the crown. There are also multiple secret passages.[9]

Stormwind Keep was destroyed by the Old Horde during the final days of the First War.[2]

Once the kingdom was retaken after the Second War, a new castle was raised upon the foundations of the old one.[10]

In its throne room, Katrana Prestor was revealed as Onyxia.

The statues of the Royal Gallery were damaged by the Cataclysm.

During the War Against the Nightmare, the keep was initially one of the places not caught in the mists of the Emerald Nightmare, although the horrific dreamforms of the Nightmare's victims converged on the keep, while it was defended by the keep's guards and King Varian.[11]

During the Burning Legion's third invasion, the keep was infiltrated several times. First, demons disguised themselves as soldiers in the funeral ceremony for Varian Wrynn when the Alliance leaders gathered. They were exposed by their new allies, the Illidari.[12] A nathrezim, disguised as a guard, tried to assassinate Anduin Wrynn.[13] Later, the city was under martial law, with the keep being extra guarded. It was, however, infiltrated by the Veiled Hand, as well as the Uncrowned who ultimately stopped the demon cult. The center of the throne room had a big demonic rune painted on the floor, and the garden had a demonic portal summoned by the traitor Melris Malagan.[14] 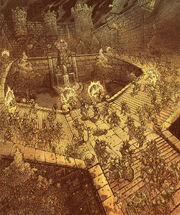 Stormwind Keep as depicted in Elegy.

The mighty Stormwind Keep (or Stormwind castle)[15] sits watch over Stormwind atop the cliffs north of the city. Brann Bronzebeard helped construct this fine building. It houses the King himself and many of the city's nobles. It was designed with the thought of another invasion in mind: if the city fell to an army vaster than it could handle, the keep itself becomes a means of escape, with several secret tunnels entombed deep within the rock.[16]

Stormwind Keep is depicted close to its World of Warcraft incarnation but its interior is different. It notably contains the throne room.