This article is about the organization. For the guard units in-game, see Stormwind Royal Guard (NPC).

The Stormwind Royal Guard are an elite unit of the Stormwind Army that serve as the personal guards of the House of Wrynn, the ruling dynasty of the Kingdom of Stormwind. They are charged with protecting the ruling monarch of Stormwind and their family, and will often accompany members of the royal family (especially the king) on journeys or expeditions.

The Stormwind Royal Guard act as a last line of defense for the monarch of Stormwind. While they are regularly seen to guard their sovereign within Stormwind City, they also frequently travel to distant lands and war zones, should the monarch's duties also bring them there. The Royal Guard also form the permanent garrison of Stormwind Keep, with the majority of their number based from there.

In addition to safeguarding their sovereign, Royal Guards have been sent to carry out other important tasks for the monarchy, such as delivering sensitive messages.[1]

During the Gnoll War and the Gurubashi War, Barathen Wrynn charged into the fray twice, each time followed by his personal guards. Half of the knights died during the first conflict but were ultimately victorious, while the king died on the field of battle during the second one.[2][3]

Prior to the events of the First War, they were known as the King's Honor Guard. Sir Anduin Lothar was notably a member of the force.[4] At this time they served as the protectors of King Llane Wrynn I, though Llane would eventually be assassinated by the half-breed Garona Halforcen.

Following the fall of Stormwind City to the Horde at the end of the First War, it is unknown whether the Royal Guard continued to function; the young heir to the throne Varian Wrynn at this time resided in the protection of Lordaeron's Capital City. Nevertheless, when Varian ascended to the throne and Stormwind was rebuilt after the Second War, the Royal Guard returned as the bodyguards of the Stormwindian monarch once again. 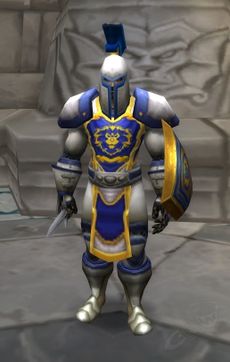 The Royal Guard continued to operate during the time of the regency in Stormwind, guarding Stormwind Keep and Prince Anduin Wrynn in his father's absence. The machinations of the black dragon Onyxia, disguised as the influential royal advisor Lady Katrana Prestor, affected even the Royal Guard itself. Many members of the force were secretly supplanted with the broodmother's agents.[5] These forces eventually revealed themselves and attempted to slay King Varian and his allies when they confronted Onyxia in the throne room, though they were overcome.

During the War Against the Nightmare, many of Varian's personal contingent were turned to sleep. Its captain of the guard stood by Anduin when he fell to sleep.[6]

Members of the Royal Guard accompanied King Varian and Lady Jaina Proudmoore when they traveled to attend the Argent Tournament in Icecrown. They were present with the king when he met with Highlord Tirion Fordring. 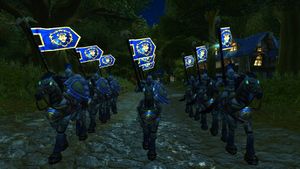 At the time of the Cataclysm, the Stormwind Royal Guard was deployed to areas of Elwynn Forest, where serious threats had begun to emerge. Mounted Royal Guards patrolled the region's roads, while another contingent was based in Northshire Abbey to keep the route open and the abbey safe. The Royal Guards also issued a proclamation ordering the destruction of all gnolls in the region of Three Corners, in the southwestern area of Redridge Mountains.[7]

Royal Guards periodically accompanied King Varian Wrynn, and his son Prince Anduin, throughout the conflict in Pandaria. The prince's two royal bodyguards would travel with him to the Tavern in the Mists, as well as to the Timeless Isle off Pandaria's southeastern coast. Two members of the Royal Guard were present with King Varian at the battle for Shimmer Ridge against the Frostmane tribe of trolls (though neither the king nor his guards saw combat).

The Royal Guard were finally present with King Varian and other Alliance leaders throughout the Siege of Orgrimmar, with a large force accompanying the king himself as he addressed the new Horde Warchief Vol'jin upon defeat of Garrosh Hellscream. Highguard Kailus and Highguard Tyrius were two guards present during the conflict. 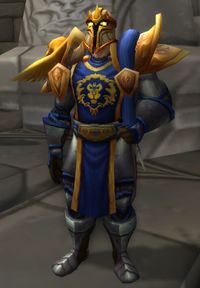 At the onset of the third invasion of the Burning Legion, King Varian Wrynn was killed at the Battle for Broken Shore, with Anduin Wrynn becoming the new King of Stormwind and thus the primary charge of the Royal Guard. During the subsequent funeral of King Varian, demonic assassins infiltrated the ranks of the Royal Guard and staged an attack on the new King Anduin and the gathered Alliance leaders. With the help of the real royal guards and Alliance champions, the ambush was a failure.[8]

Another demon assassination attempt was made on the king some time later, when a disguised nathrezim attacked Anduin in the Keep. He quickly dealt with the demon, however, before the Royal Guard could even arrive, though they were ordered to sweep the Keep for any other Legion agents. The garrison of Royal Guards in Stormwind Keep was later put on alert when the Veiled Hand and the traitor Melris Malagan infiltrated the fortress.[9]

A squad of Royal Guards would eventually accompany King Anduin as he delivered a speech at Lion's Rest officially announcing the defeat of the Burning Legion.[10]

King Anduin Wrynn is guarded by Lion's Guards, however ordinary Royal Guards are still in service.[11] 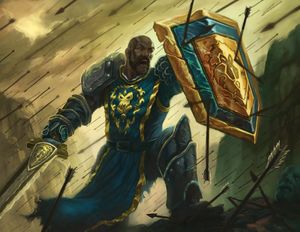