Strahnbrad is a Syndicate-controlled ghost town located east of Alterac and west of Chillwind Point. The town is situated in a strategic position on the northeastern foothills of the Alterac Mountains, close to the border with the Western Plaguelands. It has an abandoned town hall and blacksmith. There is a Horde flightmaster, Phillip Harding, located nearby. Gol'dir, formerly a prisoner here, stands next to him.

All of these quests in Strahnbrad were removed from the game in Cataclysm. This area no longer serves any purpose, other than killing Syndicate members for reputation.

Strahnbrad was part of the Kingdom of Alterac prior to the First War.[1] 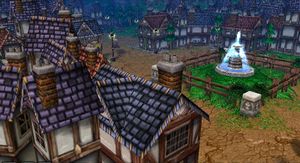 Ravaging Blackrock orcs raided Strahnbrad shortly prior to the Third War, in order to capture slaves to sacrifice in the name of the Burning Legion.[2] The settlement was almost completely defenseless (only a handful of footmen were stationed in the town), but they were able to send a request for help before the attack started. In response, the Knights of the Silver Hand moved quickly to prevent the orcs' aggression, dispatching the legendary paladin Uther the Lightbringer and Prince Arthas to the scene. Uther advanced to the orc encampment to try and stop the orcs from attacking, and Arthas was sent to defend Strahnbrad, in case Uther was too late.

On his way to Strahnbrad, Arthas rescued Little Timmy from gnolls and killed Menag, Benedict, and their band, the Bloodhill Bandits, who were notorious in the region. Arthas and his footmen arrived later at Strahnbrad, but the attack had already begun. Dean, Joe, Mike, Scott, and many more villagers died. Some defenders of Strahnbrad reunited with Arthas and his men and together they were able to rout the orcs easily. The attack was directed by the Slave Master of the Blackrock orcs, but Arthas and his men defeated his grunts and raiders, finally killing him. The Alliance won the battle, but much of Strahnbrad's population was devastated by the Blackrock raid.[3]

It is not known whether Strahnbrad fell to the Scourge or not, but by year 25 the Syndicate was already using the town as their main base of operations to recover the Alterac Mountains for themselves. The Syndicate captured Gol'dir and imprisoned him in one of the town cells. They used the orc as a slave worker forcing him to haul burdens, dig and much more. Krusk sent Horde adventurers to free him discovering the location of

The Forsaken expanded their influence in the area with Phillip Harding who stays here as a flight master. The liberated Gol'dir accompanies him.

The Forsaken dark rangers have taken control over the abandoned Strahnbrad and were using it to launch guerrilla tactics against Alliance forces.[6] The Horde also attacked an Alliance army here coming from the Plaguelands.[7]

Strahnbrad (also known as Strombrad)[8] is a ruined but once thriving city in the Alterac Mountains which the Syndicate now holds. They are using it as their main base of operations. The Syndicate have renovated the jail, and digging teams constantly break into old cellars and sealed vaults, searching for treasures the Scourge overlooked. When they meet, the nobles convene in this derelict town.[8][9]