The Stranglethorn Fishing Extravaganza is a grand event set along the coasts of Stranglethorn Vale. Early in the day, a friendly neighborhood dwarf/goblin will visit Ironforge and Orgrimmar respectively to inform aspiring anglers of the grand tournament and give instructions. At the appropriate time, the shout will ring out across Stranglethorn to bait your hooks and cast your lines!

Will you be the master fisherman that gathers the necessary amount of tastyfish to win the grand prize? Can you reel in the right fish to receive some of famous Nat Pagle's fabulous fishing equipment? Will the

The Stranglethorn Fishing Extravaganza is a weekly fishing event held in Stranglethorn Vale. There is a highly competitive fishing contest and a more casual rare fish turn-in for this event.

As this is a timed competition and thus time-sensitive, with the introduction of connected realms, time zones are now used to start the tournament rather then with realm time like all other holidays/events. This is so everyone starts at the same time and makes things fair for all competitors.

This event is held every Sunday from 2pm-4pm, which translates to:

The turn-in NPCs are available until 5 p.m.

The competitive portion of the event

The contest is to catch 40

[Speckled Tastyfish] and to turn them in to Riggle Bassbait in Booty Bay before anybody else does.

The mechanism of the turn-in is a quest, which only the first three winners each week to complete it can complete.

Riggle Bassbait will yell zone-wide (both the Cape of Stranglethorn and Northern Stranglethorn) with the following announcement:

After this announcement, the majority of fish caught in fishing pools will be tastyfish, but rarely players may catch non-contest fish.

The first three winners will receive the

[Master Angler of Azeroth] achievement, and a reward choice depending on their placement.

[120] Grand Prize winner of the competition can pick their prize out of:

[120] Second Place winner can pick their prize out of:

The Stranglethorn Fishing Extravaganza prizes are Bind on Pickup, so each character must win their own. Except for the

[Dread Pirate Ring] as it's Bind to Account (BtA).

How to catch Speckled Tastyfish 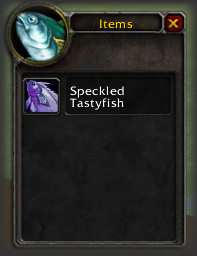 Speckled Tastyfish can be fished from any Fishing pool anywhere in Northern Stranglethorn or the Cape of Stranglethorn, but only during the two hours of the event. This includes all inland and non-contest pools in the ocean.

With your fishing pole equipped, face the school and cast. Your bobber must land inside the school in order to catch the event fish, so cast again each time the bobber lands outside of the circle. When you have caught 40 Speckled Tastyfish, turn them in immediately.

A skill of at least 100 is highly recommended, however, so that you may learn

[Find Fish]. With the Find Fish ability, fishing pools will appear on your minimap. Try to acquire a

[Weather-Beaten Journal] and learn the ability prior to the event. They can be found in trunks and chests fished from any school in Kalimdor or the Eastern Kingdoms. Junk pools drop chests more often than fish pools, so these are a better source for the book if you are farming it.

Practice fishing Fishing pools prior to your first Stranglethorn Fishing Extravaganza, so you know how the placement of the bobber in the circle works. Also, set your

[Hearthstone] to the Booty Bay inn to expedite your turn-in.

Bring assistance. Take turns on who assists/competes in a given week (but don't switch roles within a week during the competition). Friends can spot Fishing pools for you. Northern Stranglethorn and the Cape of Stranglethorn have level 20-30 mobs. Friends can help with this if you need help.

You can deplete a competitor's pool by fishing it. On a PvP server, the Stranglethorn Fishing Extravaganza is essentially a battleground. Ganking is a valid contest strategy. Come with many friends.

Turn off your PvP flag for this event if you are not on a PvP server. If there's an announcement when there are winners, it's very difficult to notice when your eyes are locked on your bobber. But if you're at it for more than 20 minutes (Normal Realm) or 25 minutes (PvP Realm), others have probably already won.

Riggle will make zone-wide announcements for the first and second place winners:

Characters who are currently hostile or hated with Booty Bay can still turn in to Riggle—as he is not affiliated with the Booty Bay faction. Riggle stands on a dock out in the open not far from the fishing trainer, so competitors with flying mounts can reach him if they hurry. Quickly turn in after reaching him, however, as he is in range of the Booty Bay Bruisers who will make their displeasure known.

You can continue to fishing after all winners have been declared. You can safely fish all the way until 4pm; the NPCs for the turn-ins (Jang and the Fishbot 5000) will stay around for an hour after the tastyfish become unavailable.

There are rare fish you can also catch, which you can turn in to the Fishbot 5000 NPC for special rewards. These fish do not expire, and can be saved to be turned in during a future Stranglethorn Fishing Extravaganza.

Additionally, fishers can catch a

[Rockhide Strongfish], which can be equipped as a one-handed mace!