Stratholme (or Stratholme City)[1] (pronounced ˈstrathːhɔlm[2] or STRATH-olm)[3] was the northernmost and second most populous city of the Kingdom of Lordaeron. It was here where the Order of the Silver Hand was founded. Today, Stratholme is the Scourge's capital in Lordaeron. The mad Prince Arthas ravaged the city in the Third War and the undead moved in soon after. Stratholme burns to this day.

The city included many well known buildings, from the glorious Bastion of the Silver Hand to Fras Siabi's famous tobacco shop.

After the Troll Wars and King Thoradin's reign of Arathor, many humans expanded the nation settling in the northern lands of Lordaeron, formerly ruled by the Amani forest trolls. These humans populated the Eastweald some 2,700 years before the Dark Portal and founded new Arathi settlements.[4]

The Church of the Holy Light, with its origins tracing back to the chaos of the Troll Wars, was founded some centuries later in Lordaeron. It became a predominant human religion and the church constructed temples and shrines throughout the human lands. Among the oldest and most revered of these holy sites were the temples in the Eastweald, including Stratholme.[5] The region eventually fell under the sway of the Kingdom of Lordaeron. 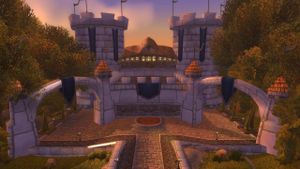 Stratholme gates before the Culling.

Stratholme was the second largest city within the kingdom of Lordaeron, matched only by the capital. At the beginning of the Second War, Stratholme, specifically the Alonsus Chapel, was the location where the Archbishop Alonsus Faol founded the holy Order of the Knights of the Silver Hand, and indoctrinated its first five members, including Uther the Lightbringer and Saidan Dathrohan.

Prior to the burning of Quel'Thalas, Turalyon, Alleria Windrunner, Khadgar, and their army disembarked near Stratholme and went to Quel'Thalas.[6]

During the Second War, renegade Alterac soldiers and sailors were brought here to be restrained until they could be escorted to Capital City for interrogation.[7] Stratholme was also an important port town and the chief source of Alliance oil in the north. While the city was preparing to deliver massive amounts of oil to the kingdoms in western Lordaeron, the Horde sabotaged its refineries and oil platforms to halt the shipment, and then destroyed the city.[8] With the destruction of Stratholme, the Alliance supply lines to Quel'Thalas were severed.[9]

The city was also where the one of the original paladins, Tirion Fordring, was tried for treason against the Alliance for defending the orc Eitrigg. The trial was conducted by Uther the Lightbringer himself and overseen by various leaders of the Alliance. Tirion was found guilty, stripped of his powers (unsuccessfully), and was exiled from the Alliance lands. The following day the city came under attack by a small but well trained band of orcs under the command of the young Warchief Thrall, determined to save Eitrigg. Amidst the chaos Tirion and Eitrigg escaped into the countryside. 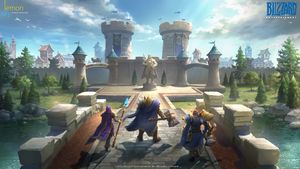 Jaina, Arthas, and Uther approach Stratholme before the Culling. 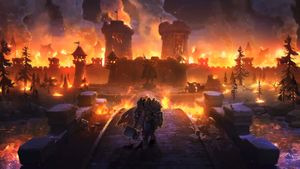 A burning Stratholme after the Culling.

Just before the Third War, the Plague of Undeath sweeping over Lordaeron reached Stratholme in infected shipments of grain from Andorhal. The populace, unaware of the plague, baked and consumed the infected grain, unknowingly sealing their fates. The dreadlord Mal'Ganis had chosen Stratholme for some specific reasons. It was heavy populated and was the Eastweald's most important city, strategically and economically. It was also a holy site, being the Silver Hand paladin order's birthplace. If Stratholme fell to the plague and became an undead stronghold, Lordaeron would lose their control of the Eastweald.

Soon after, as the first undead started to rise, Prince Arthas, Uther the Lightbringer, Jaina Proudmoore, and a contingent of soldiers arrived at Stratholme, but soon realized the city had already been infected. Arthas believed that the only way of to prevent Stratholme from becoming a bastion of the Scourge was to purge the city. And so, the Prince ordered his comrades to kill the plagued (but not yet turned) citizens. For Arthas, this was as much of an act of mercy as it was a strategic decision. If the populace of Stratholme knew they were about to turn into undead monsters that would attack everyone they loved, what would they prefer? Arthas knew if he contracted the plague he would rather die a clean death as a free-willed human than a mindless walking corpse.

Most of the soldiers and allies, including Jaina, and Uther and his paladins, chose not to help Arthas, thinking his purge was madness. The Prince and some soldiers, however, went on. Fire engulfed the city while ash and ember billowed through the streets. Screams were heard, and the blood of innocents ran thick along the cobblestones. Almost the entirety of Stratholme's population was massacred by them, along with the undead. Amid the chaos, Arthas confronted Mal'Ganis, but the dreadlord told him to seek him out in Northrend, fleeing from the site. With that, Arthas gathered his forces, leaving the city while fire swept over Stratholme's ruins. Days later, Jaina and Uther returned. To their shock, it was even worse than what they expected as bodies littered the streets and much of the city was burned to a husk.[10] The majority of the few survivors decided to leave with Jaina.[citation needed]

Some time later, Stratholme was taken under the control of the Undead Scourge. Once the Scourging of Lordaeron had ended, after the death knight Arthas had been called back to Northrend, the lich overlord Kel'Thuzad established Stratholme as his capital[citation needed]  and positioned his floating fortress, the necropolis Naxxramas, above the plagued forests near the ruined city. 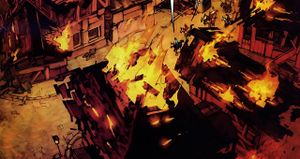 Stratholme in the Ashbringer comic.

Stratholme was the largest stronghold held by the Scourge in all of Lordaeron. Leading the undead forces in the city was a former noble turned death knight by the name of Baron Rivendare, who coordinated the efforts of the Lich King in the Plaguelands, where he constantly battled the force of the Scarlet Crusade and the Argent Dawn. However, one small area in Stratholme remained under the control of the living: the Scarlet Bastion, from where the Grand Crusader Saidan Dathrohan himself led the Crusade against the Scourge. However, the Crusaders fanaticism led them to believe that any who were not members were corrupted by the undead and had to be destroyed. As a result, the Argent Dawn sent adventurers to kill the Grand Crusader. To their surprise though, they discovered that the Grand Crusader had, in fact, been dead for years, having been impersonated by the dreadlord Balnazzar. They eventually overcame the demon, however, leaving the remnants of the Scarlet Crusade to deal with the Scourge alone.

Balnazzar, having suffered bitter defeat,[11] shed his human form and killed all of the Crusaders in the western portion of the city, raising them into undeath and calling them the Risen.[12] On the eastern portion of Stratholme, Baron Rivendare, having traveled to Naxxramas, was replaced by his son, the fallen paladin Aurius Rivendare.

Crusade Commander Eligor Dawnbringer, Master Craftsman Wilhelm, and Packmaster Stonebruiser, and Crusade Commander Korfax and Archmage Angela Dosantos offered rewards to adventurers to help them end these menaces. After killing both leaders, the Argent Crusade attacked the remaining undead and took control of the ruined city, though only for a time as the undead still roamed its streets.

During the Burning Legion's third invasion, the city was invaded by the Knights of the Ebon Blade in order to retrieve the saddle of Deathcharger's Reins. The death knights fought against a Patchwork Horror and a ghost named Vivian's Lament.[13]

The reformed Knights of the Silver Hand and their Highlord traveled to Stratholme for the city's Holy Water in order to purify Aurius Rivendare's mount Shadowmane, creating the Glowing Reins of the Golden Charger. The death knight Raemien the Soultaker wanted to spread the plague once more.

The remaining Scourge members and Raemien were killed and the Silver Hand resolved to keep a closer eye on Stratholme.[14]

During the Blood War, the Scourge activity increased in the ruined city and and the Argent Crusade detected a new threat.[15][16] Sean Wilkers and the adventurer worked on clearing the Scourge out of the Stratholme Service Entrance. They were successful, but they also found two shadowy figures in the Slaughter House who used necromantic magic on Brightmare and escaped. 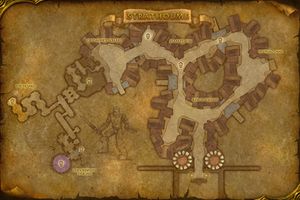 Map of the western half of Stratholme. 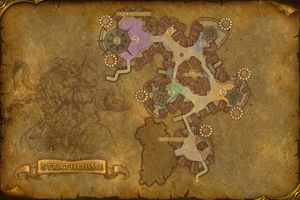 Map of the eastern half of Stratholme.

Stratholme was once the jewel of northern Lordaeron, but today it is remembered for its harrowing fall to ruin. It was here that Prince Arthas turned his back on the noble paladin Uther Lightbringer, slaughtering countless residents believed to be infected with the horrific plague of undeath. Ever since, cursed Stratholme has been marred by death, betrayal, and hopelessness.

Getting to Stratholme is exceedingly dangerous and trying to enter it is a death wish. In its glory days, Stratholme housed nearly 25,000 people. Now it is a place that swarms with undead and their mortal servants. Dark magic pervades the air — it feels oily.[17]

The ruined Temple of Light is located here.[18]

Stratholme is a horrible, dark place, full of blacks and purples and the putrid orange mist. Undead buildings mix with human ruins. Abominations, ghouls, zombies, skeletal warriors, wraiths, necromancers and liches wander the streets and chant dark paeans in their sanctuaries. Gargoyles and frost wyrms patrol the skies. Kel'Thuzad's massive necropolis, Naxxramas, floats above the city like a bloated, diseased creature, and its violet lights, visible from miles away, symbolizes Kel'Thuzad's absolute dominance over the land. Stratholme is an impregnable fortress of evil.[17]

During the Second War, Stratholme was a valiant member of the Lordaeron Alliance. It was once the most glorious human city in Lordaeron, however, the mad Prince Arthas, believing its citizens had contracted the plague, ravaged the city during the Third War. It never recovered. The few that survived fled west to Kalimdor with Jaina Proudmoore.

When the Lich King summoned Arthas to Northrend, the traitor placed Kel'Thuzad as the leader of the Scourge located in the Plaguelands. The lich took the city after the Burning Legion's defeat and erected Scourge structures throughout the ruins establishing Stratholme as his base, and the surrounding lands completely under his rule. Stratholme is also the home of Baron Rivendare. Once a wealthy human landowner who the plague corrupted, and he pledged himself as a Scourge death knight. His duty is to round up and murder any human survivors he can find.

After the Third War, the Scarlet Crusade formed and mounted a series of small insurrections. The Crusade has been waging this dirty, underground war for several years now, and the fight has taken its toll. The Crusaders still attack the Scourge at every opportunity, however. Forest trolls under warlord Thresh'jin also moved in after the Third War. With the fall of Lordaeron and Quel'Thalas, the trolls see a path to reestablishing their old dominion.[19]

Right now, with Stratholme in Kel'Thuzad's hands, the Scourge has a method of summoning a nearly infinite supply of reinforcements.[20] Baron Rivendare and Kel'Thuzad are two key figures in the Scourge's power structure, and if someone managed to raze the plagued city and destroy them both, that would likely be sufficient to reclaim much of the Plaguelands. Taking a small group against Stratholme would be suicide and it would require the full support of all of the Alliance and/or Horde's races for the type of assault needed to take down Kel'Thuzad.[21] 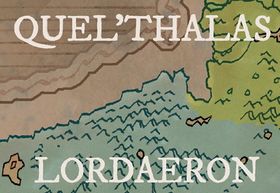 Stratholme should be located between the bay and the small lake found in the Plaguewood.