For other uses, see Stratholme (disambiguation). 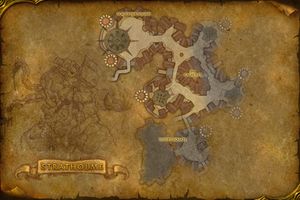 Stratholme (or Stratholme - Pet Dungeon) is the fourh pet battle dungeon. This solo scenario involves returning to Stratholme to investigate the undead.

The Argent Crusade reported an increased Scourge activity in the city. After clearing the streets and buildings of the Stratholme Service Entrance of the undead, Shadowy, Figures reveal their dark magic.

Tizzy Gearjolt at Hook Point or

Radek Fuselock at the Hall of Beasts to pick up the first quest:

Stage 1 – Did That Just Come Out of its Mouth?

Sean Wilkers says: As you can see, some unwelcome visitors have shown up here. This grotesque thing has even started spewing out more problems to deal with. Good luck and Light be with you.

Liz the Tormentor yells: Who dares disturb this place? Time to suffer!

Stage 5 – Ain't Afraid of No Ghosts

Sean Wilkers appears.
Sean Wilkers says: Well done, adventurer! These gates leading towards Slaughter Square have opened up after you defeated that apparition. Onward!
Walking to the portcullises.

Stage 7 – No Shortage of Dead Things

Nearing the Risen Guard may start

Nefarious Terry yells: Hey! Those were MY minions! Stop that!

While you were busy, I managed to cleanse the remains of that Sludge Belcher from earlier. It still smells awful, but you should be able to use it to clear out that courtyard in front of the Slaughter House just up ahead.

Stage 10 – Into the Slaughter House!

Entering the main chamber of the Slaughter House, two shadowy figures can be seen in the corners.

Shadowy Figure says: Shut up. She trusted us to complete this task, and this time, we will! With the power of science!

Shadowy Figure says: But she's always giving me orders and sending me on stupid missions. What about me? What about what I want to do?

Shadowy Figure says: All you do is whine. If you don't put a lid on it, I'll put a lid on you! Now brace yourself! It's time for stage two!

Shadowy Figure says: You're worse than she is. Why do I even talk to you?

Shadowy Figure says: Because I'm a genius! This piece of junk is taking too long. What if I remove the regulators and crank it to the max?

Shadowy Figure says: Yeah! That's more like it! Time to leave this dump.

Shadowy Figure says: What a waste of time this has been.
The blood elf goes into stealth and the gnome teleports herself.

After defeating Brightmane, Sean Wilkers teleports to the room:

Sean Wilkers says: Stratholme is clear of this undead menace for now, but it sounds like these shadowy figures are becoming more annoying as the time goes on? Maybe you should take the fight to them next time!

Some bosses have accompanying help that vary each fight: