Strike While the Iron is Hot (Lumber Mill) (Horde) 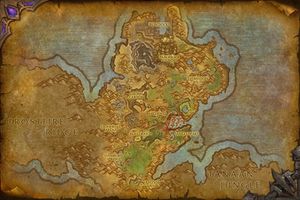 Speak to Grinslicer to fly to the Iron Approach and attack the Iron Horde.

[Will of the Genesaur], we wield a powerful weapon.

Our scouts have discovered an Iron Horde base, and I believe it is time to seize an opportunity.

They amass far to the north at the Iron Approach. This will not be easy, but we must deal a blow to the Iron Horde while we possess the artifact.

We are prepared to depart at your command. Speak with Grinslicer when you are ready.

<name>, we have dealt a great blow to the forces of the Iron Horde.

Head to the flight master:

Even the skies can be dangerous in Gorgrond. Be on your guard.

I am needed urgently at the Iron Docks.

This begins a single-player scenario. As it can only be done once, it is documented here.

I'm glad you made it here safely. Are you ready?

Let's go.
Draka says: The Iron Horde have no idea how much potential lies within the artifact. Let us give them a proper demonstration, shall we?
Commander Gar says: Ahh, there it is. There's MY artifact. How foolish of me to trust Brak with something so valuable.
Commander Gar says: It's a shame that you're too late to stop me. Surrender the artifact, and I will allow you to escape with your lives.
Draka yells: We will never surrender to you! Champion, now is the time! Use the artifact!
Commander Gar says: Hahahaha, so be it! IRON HORDE, ADVANCE!

Use the artifact to eliminate your enemies.

Using the bonus action button will summon a primal for 30 seconds that can defeat nearly everything on the field. Once everything's dead, the next stage begins.

Defeat the incoming enemies using the power of the artifact.

Several waves of forces charge in. When the cooldown on the bonus action button comes up, use it again. On a timer, Gar will release some iron stars. Just like in the Garrosh Hellscream encounter, dodge them. Fortunately, there's no wall for them to run in to and explode, though.

Once the gronnlings are dead, the next stage begins.

Stage 4: The Son of Gruul

Commander Gar yells: You will never withstand the might of Goc!

As before, wait for the bonus action button to come off cooldown and use it to finish the fight.

Commander Gar says: NO! I will DIE before I let you take what is mine! YOU WILL NOT... WIN... THIS... WAR!
Gar manages to launch an artillery attack which destroys the artifact!
Draka says: The artifact! Has he gone mad?! We must restore it. We must get it to safety.
Commander Gar says: Hahaha! Not so confident now, are we?! Face me on even ground, cowards!
Draka says: With pleasure.
Draka says: Brace yourself, champion. The might of the Horde is within you. Lok'tar ogar!

Gar will still release Iron Stars on a timer, but also has his own special ability, launching a barrage of attacks from his person, attacking everything indiscriminately within 40 yards or so.

Commander Gar yells: See what weapons I have in my arsenal!

Draka says: It is over, their defenses are broken. We have won this battle, but without the artifact we have far to go. Let us rally back at your Garrison, commander. We must plan our next course of attack.