Slay the Glacial Templar summoned from the Ice Stone located near the Dark Portal in Hellfire Peninsula. [84, 53] 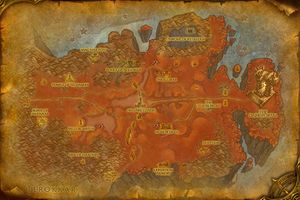 We must act to preserve the balance! Time is against us.

In order to ensure Ahune's success, the cult has established a base near the Dark Portal itself in Draenor. They use ice stones to coordinate the frost lord's arrival. Much as I am loath to do this, the spirits will understand - you must summon one of this Ahune's templar protectors and destroy it. Perhaps this forestalling action will be enough...

You have returned victorious?

You have done well. It may seem a small act, but even this can aid the fight as a whole. Take this with my blessing, and return later, as I may have more for you to do.

Fly to the Stair of Destiny in Hellfire Peninsula. Just to the southwest is a new Twilight's Hammer camp full of

Twilight Frostblades. Clear the area surrounding the Ice Stone and choose the "Place your hand on the Ice Stone" gossip option to summon the

Glacial Templar, which is a level 69 water elemental.

Players then are given access to quests based on their level: