From Wowpedia
(Redirected from Stromgarde)
Jump to: navigation, search

"Stromgarde" redirects here. For the Battle for Azeroth warfront, see Battle for Stromgarde. For other uses, see Stromgarde (disambiguation).

Stromgarde Keep, also known simply as Stromgarde,[2] is the capital city of the kingdom of Stromgarde, located in the southwest of the Arathi Highlands. In ages past, the settlement was a cradle for human civilization, when it served as the capital of the Arathorian Empire under the name of Strom. By the time of the arrival of the Orcish Horde, it stood as a major power center as part of the Alliance of Lordaeron during and after some time following the Second War.

Stromgarde was eventually sacked and left in ruins at some point after the events of the Third War, and remained in this condition for many years to follow. It was divided into three sections — one around the inner keep itself and under the rule of the Syndicate, the former mage district[2] largely under the control of the Boulderfist clan ogres with aid from the Witherbark trolls, while the last section remained under the control of the Stromgarde military and once served as the headquarters of Prince Galen Trollbane, until his death.

The outbreak of the Fourth War brought a revival for the fallen capital. Aided by the Alliance, the League of Arathor fully reestablished itself in Stromgarde and rebuilt the settlement to something of its former glory. Soon, it became the focal point of the conflict between the Alliance and the Horde for control of Arathi. Ultimately, the Alliance managed to defeat the Horde, returning Arathi into the hands of Stromgarde after many years of strife.[3]

The capital of the ancient Arathorian Empire was Strom, a fortified city that eventually became Stromgarde Keep.

After several battles against the forces of Stromgarde, the Horde eventually attacked the capital of the kingdom with a maritime assault.[4] 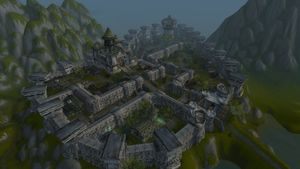 The ruins of Stromgarde

One of the highest-ranking leaders of the Syndicate, Lord Falconcrest, commanded Syndicate efforts in the Arathi Highlands from the ruined city. The Stromic army had placed a bounty on his head and sought the help of the Alliance heroes.

The sword Trol'kalar, legendary bane of trolls and heirloom of the Trollbane family, was sealed away in the Trollbane Family Crypt and protected by Galen until adventurers of the Horde killed him, unsealed the tomb, and took the sword to Zengu.[5] Zengu tasked the adventurers to retrieve the sword so that it could be used against the trolls of Zul'Gurub.[6] When he got the sword he quickly took off alone, but was killed by the humans of Stromgarde. They returned the sword to its proper place, resealed the tomb, and once again split the sigils among their people, under Galen's successor's orders.[7]

By the Cataclysm, Galen was raised by the Forsaken and aided them in reclaiming Trol'kalar, this time for their own use.

Some time before the third invasion of the Burning Legion Galen was finally able to reclaim Stromgarde Keep for himself before or after he broke off from the Forsaken. The city was now almost completely under the control of undead Stromic people, including Stromgarde Defenders, cavalrymen, troll hunters and citizens. Only a group of Witherbark tribe trolls remained in the former mage district.[2]

When the Knights of the Ebon Blade came to resurrect his father, Galen tried to double cross them and made a last stand in the Sanctum, where he died a second and probably final time.[8]

As agreed by King Anduin Wrynn and Warchief Sylvanas Windrunner, Stromgarde Keep was taken by the Alliance to act as the base for the Stormwindian people participating in the Gathering. The Conclave priests gave them blessings in its chapel. During the Gathering, Alliance leaders stayed atop the ruined ramparts to observe the meeting.[9]

Stromgarde citizens seem to have returned home, along with the League of Arathor. The rebuilt city served as the Alliance's base of operations during the Battle for Stromgarde, as the Horde forces of Ar'gorok sought to conquer the Arathi Highlands. Should Stromgarde Keep fall to the Horde, Stromgarde Keep will lie in ruins with the Vengeful Ghosts of the Alliance's dead haunting it.[10] The Alliance would then need to gather enough resources to restore the base and continue their bid to conquer Arathi.

Ultimately, the Alliance was able to defeat the Horde, thus returning Stromgarde Keep as the capital of its eponymous kingdom.

After the end of the Fourth War, Alleria Windrunner, Turalyon and over 20 soldiers were searching for Horde refugees fleeing Stromgarde Keep.[11]

Once called simply Strom, the city formerly served as the capital of the ancient Arathorian Empire. Currently, the former Arathi Highlands's capital of Stromgarde is still held (barely) by its rightful leader, Prince Galen Trollbane. The city is the center of a power struggle between the city's defenders, the Syndicate and the Boulderfist ogres. A mysterious man called Lord Falconcrest commands the Syndicate in the city.

Like with Dalaran during the Second War, the Horde's attack on the keep hasn't been mentioned in any other sources besides Warcraft II. Tides of Darkness actually presents Stromgarde when the betrayal of Perenolde was revealed. No attack on the keep has been mentioned there, and Thoras's guard captain only complained about not having enough soldiers to move into Alterac because the soldiers were with the main Alliance army. That would mean that if the Horde attacked, Stromgarde would probably have fallen without the relocated soldiers.