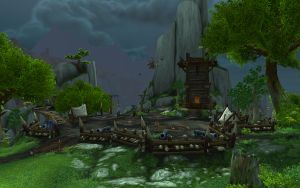 Strongarm Airstrip while under Alliance control.

Strongarm Airstrip was an Alliance airfield in Jade Forest, overseen by Captain Doren in his campaign against General Nazgrim and the Horde. It was from here that Doren produced the gyrocopters that struck down Hellscream's Fist, outside of Thunder Hold. The Horde led by Nazgrim captured the airstrip but abandoned it sometime later.

Captain Doren established the airstrip because the ruins he set himself in and surrounding jungle were too dangerous for the air traffic of the gyrocopters given to him by the Skyseeker.[1] Pandaren Volunteers from Honeydew Village, curious of their new neighbors, agreed to help. They soon realized that the site was a war base, but the soldiers there kept them against their wills.[2] The Alliance also stockpiled fireworks launchers, perhaps to use them as improvised weapons, as they were capable of bringing down gyrocopters.[3] Along with Doren, the base was staffed by a few other personnel of note: a dwarven death knight named Morgus Grimhatchet, the famed Corporal Jackson Silver, and the two engineers responsible for the base's supply of gyrocopters: Master Engineer Cogswing and Gyro-Mechanic Lavenderp.[4]

After regrouping, Horde forces struck out from the recently captured Nook of Konk, eliminating the base's soldiers and lieutenants, freeing the workers, and destroying the gyrocopters. Doren was found in his holdout, the Den of Defiance, on the outskirts of the base. After a confrontation with an adventurer, Doren succumbed to the malignant influences of the sha.[5] After his defeat, General Nazgrim claimed the airstrip in the name of the Horde, and used it to launch attacks on the nearby Forest Hozen. Once the Horde forces there allied themselves with the hozen, however, the base was left in flames.