Strongbo, also known as simply Bo, was the greatest martial arts master on the Wandering Isle, holding a position known as Geomaster. Although primarily a melee fighter, Bo seems to have some shamanistic powers, specifically within the element of earth.

During his days training as a fighter, Strongbo was close friends with Chen Stormstout. Where Chen split his skills evenly among storm, earth and fire, Bo focused solely on earth. The two both knew that some day they would challenge each other to decide who would be the master of the Wandering Isle's martial arts school, taking the position of "Geomaster". However, over time Chen grew a sense of wanderlust and would often laze about daydreaming. Bo attempted to tell him that all they would need was at their home. They had an argument, and on the day of their challenge Chen did not appear - he had left the island. Bo grew to resent and remained angry at Chen since that day.

He grew to be the Wandering Isle's most successful martial artist. Among his students were Li Li Stormstout and Shisai Stormstout.

Strongbo was teaching a group of young cubs when he noticed Li Li walking beside the pools, and correctly guessed that she was up to no good. He would later catch Li Li as she was exploring the Forbidden Forest and take her home. Chon Po declared that her punishment would be to suffer a full week of training at the Singing Pools under Bo's watchful eye.[1]

After Li Li ruined a Spirit Festival performance she was participating in by sleeping behind the curtains, she got into an argument with her father Chon Po Stormstout about how the pandaren of the Wandering Isle had forgotten the lessons of Liu Lang: that life was an adventure. Chon Po ordered Li Li to never again enter the island's library, but Li Li stormed off and ran away to find her Uncle Chen. Chon Po hired Bo to find her, and he swore on his life that she would not come to harm.

Bo found Li Li in the Salty Sailor Tavern in Booty Bay and told her to return to the Wandering Isle. Li Li, having expected him, told a pair of goblin bruisers that he took her rocket mount. As Bo fought them off, Li Li ran off into the jungles of Stranglethorn Vale on her way to Stormwind and the ship Chen was on. That night Bo found Li Li by some troll ruins, having seen her fire from town. Bo told her they were going home immediately, but Li Li convinced him to at least try some of the tea she had brewed first. Bo agreed, but after one sip he fell unconscious from something Li Li had slipped in the drink. 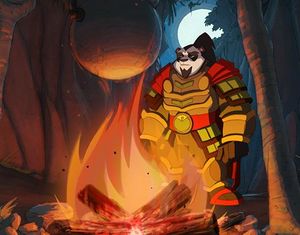 The next day found Li Li in Westfall, picking

[Silverleaf] when Bo caught up to her. Li Li said that nothing he did would convince her to go home. As they walked through the fields, she noted the smell of sulfur and fireworks. Focusing on Bo once again, she told him that she wasn't going home and so far hadn't been hiding from him either. What if she actively avoids him next time? What would he tell Chon Po? Li Li told him he'd have to return alone and ran off into Elwynn Forest. Bo followed, telling her he'll accompany her until she realizes what a harsh and dangerous place Azeroth really is and begs him to return home. As the pair made their way to Stormwind, they were watched by the goblin Rumblefitz, the source of the smell Li Li had noticed earlier, and his ogre partner Blokk.

In the Cathedral of Light, Li Li was reading up on the Light. Bo made a joke that perhaps the Light could shine on Thunderbrew so they could leave, catching the attention of a nearby priest. He told them of the Thunderbrew ale and Brewfest, which was currently going on. While waiting for the Deeprun Tram, Li Li asked Bo why he was always so grumpy, especially whenever she talks about Chen. Bo told her that he and Chen used to be friends, but didn't continue on the subject. As they boarded the tram, Li Li smelled the same scent from earlier, the scent of sulfur and "the stuff Granny Mei drinks to help her sleep." This time, Bo smelled it as well. 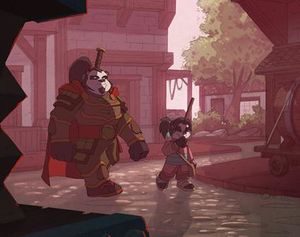 Bo and Li Li walk to the Deeprun Tram.

On the tram, Li Li was preoccupied by how fast they were going though Bo was paying more attention to the scent. He found the source was Rumblefitz, and realized the goblin had been following them all day. Rumblefutz tossed a potion which caused an explosion, sending passengers flying and knocking Bo onto the car behind them. Li Li fought off Rumblefitz, knocking him off the car and onto the tracks. However, Bo told her they should have questioned him. Li Li wanted to know why it matters what he wanted, and Bo said this was just another reason the world was dangerous.

In Ironforge, Bo complained about how the carved out city was harming the earth elementals in the area. Li Li told him how the dwarves evolved from the Earthen, created specifically to dig out the crust of Azeroth. Bo replied that the earth was in distress, and he could feel the pressure building. Li Li replied that that didn't mean it was the fault of the dwarves. The subject turned more lighthearted as the two of them found a group heading out to Dun Morogh for Brewfest. Li Li decided that dwarves were suddenly her favorite people.

At Brewfest, the two of them ran into Daran Thunderbrew, who was shocked at seeing pandaren and thought they were figments of his grandfather Grimbooze's imagination. He told them the story of how Grimbooze Thunderbrew and Chen once had a drinking contest that would be recognized as the original Brewfest. Daran told them that after that day, Chen had moved on to Kalimdor and the Stonetalon Mountains to find hops for his brews. The Dark Iron dwarves attacked Brewfest then as they always do, and Bo and Li Li aided in the defense of the kegs. King Magni Bronzebeard himself appeared then, saying that Chen helped him during the Third War and any friend of Chen's was a friend of Khaz Modan. Li Li requested transportation from Magni, and he provided them with a zeppelin and two ram mounts.

Li Li wrote a letter to her father and sent it to the Wandering Isle as a magic-powered origami crane. As Li Li continued to want to know Bo's history with Chen, he told her the story; how Chen and Bo were great friends fated to duel to decide who was Geomaster, and Chen left the island the day of their fight. Li Li thought it was a stupid reason for Bo to hate her uncle. Their zeppelin flew over Orgrimmar, and Li Li told Bo a very brief summary of the story of Thrall.

The goblin pilot told them that because of Venture Co., the Windshear Crag was cleared out and therefore a nice open spot for them to land. Bo asked for an explanation, and upon finding out that they dealt in natural resources he declared goblins parasites and a disease. Having landed in Stonetalon, Bo used his shamanistic powers to communicate with the earth spirits and find a hidden valley in the north where the plants Chen had looked for grew. Li Li decided to have a race, and Bo's ram grew excited at the prospect, storming off at an incredible speed.

However, the valley was seemingly empty, despite Bo sensing the plant there. Keeper Orremin, along with two dryads, appeared and declared that nature's gifts were elusive. Orremin told the two of them his meeting with Chen, working with him to fight off goblins from the valley though in the process the rare indellium plants were largely destroyed. Orremin removed the illusion on the valley, revealing the hops and offering some to Bo and Li Li as friends of Chen. Orremin pointed them to Azshara next, saying Chen was going there to reflect on the past.

On the road again, Li Li brewed the plants into a beer which she declared her very best work. Bo declined her offer, stating he doesn't drink, and so she saved a large amount in the Jug of a Thousand Cups to give Chen later. The two soon came across the Ruins of Eldarath, where Li Li recounted a legend that once the ancient pandaren delivered a gift to the Highborne said to contain all the arcane magic the night elves would ever need. Li Li believed it could be found in Eldarath, but inside the temple, the pandaren-made chest she found was empty. Bo commented that that was the message the pandaren left the elves, all the arcane magic they would ever need... nothing. They didn't need arcane magic. He wondered what Li Li had been expecting, and she had hoped for a clue from her uncle.

Bo asked if she had seen enough by now, but Li Li was determined to find some clue to find Chen. As the two argued about their travel, Bo didn't notice that Li Li had ran from the temple as he spoke and been kidnapped by the fel orc Rahjak.

Rahjak left a message carved in stone telling Bo that Li Li had been brought to an island and he was to come alone or she would die. Bo arrived at sunrise, fighting Rahjak to free Li Li. Early into their match, Rahjak's sword shattered Bo's staff. Bo kept one of the broken fragments on his person and tossed the other at Rahjak, but the orc dodged it. However, he gained the upper hand and knocked Rahjak into a rock formation then slashed at him with the broken wood. Rahjak replied with

[Mirror Image] and surrounded Bo, catching him off guard and wounding him mortally across the chest. Rahjak prepared to kill him, however at that moment Chen Stormstout arrived on the island upon a

Chen took over the fight from Bo, and was able to steal Rahjak's sword to kill the naga Zhahara Darksquall who was holding Li Li. With Chen's back turned from Rahjak the orc attempted to kill him, but Bo stabbed him through the torso with the broken piece of his spear he had held on to. Since Bo was dying, he asked Chen to take Li Li home, as he could not do it himself. He wished to watch the sunrise in his last moments, and as Chen and Li Li left on Chen's rocket, his body became one with the earth as he passed away, turning into a stone pandaren figure eternally sitting on the shores of the island.