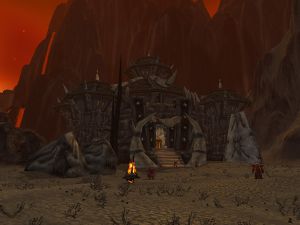 Blackrock Stronghold in the Burning Steppes.

Strongholds were the center of larger orcish and Horde settlements during their wars against humans and the Alliance. This has changed, for they are now rare and the modern Horde seems to favor large towers or barracks as hub for their towns.

The massive, jagged spires of the orc stronghold were a constant reminder to the Horde of their power and dominance. As the center of larger orcish settlements, the stronghold could process resources in the same fashion as a great hall - and the overseer could induce the production of more gold from the pitiful worms under his command. These intimidating structures of steel and stone used techniques in their construction that served as strong barriers, greatly reducing the damage inflicted by attacking forces. Convinced of their innate superiority as warriors, troll berserkers and ogres would only act under the direction of an overseer who had proven himself capable enough to establish a stronghold. As need and resources dictated, a stronghold could be reinforced and refitted as a fortress.[1]

The orcish stronghold is the upgrade of the great hall, and can be upgraded to a fortress.[2]

As said above, strongholds are now rare and the modern Horde seems to favor large towers or barracks as hub for their towns. Stronghold can also refer to both the building and the community within its walls, and as such many races besides the orcs are known to build fortified areas and call them strongholds.

Considering that the town hall in Frostwall is referred to by Serka as a great hall, its level 3 variant could be a stronghold. This would match with Warspear Keep, which is using the same model and is designated by its name as a fortified military structure. 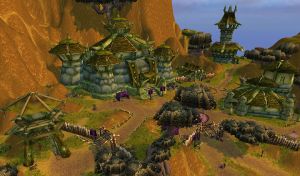 Despite being designated as keeps, most of these are using a stronghold model instead, though some of them uses a barracks model as well. 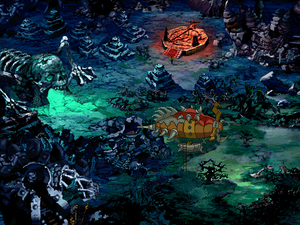 In Warcraft Adventures, the ruins of a stronghold could be seen in the abandoned Grim Batol.