A young Subject Nine at the KTC Headquarters with a gizmo helmet.

Subject Nine is a sentient raptor attempting to engineer an escape from the Secret Lab in Azshara. Imported from the Barrens, she could be found as a hatchling at the KTC Headquarters in Kezan, where she was made intelligent by Hobart Grapplehammer. She was bred with Subject Four in order to create a unique race of cognitively superior raptors. She now plans to leave Azeroth with her children and colonize a new world. 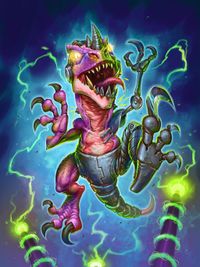 Subject Nine's dialogue changes everytime she is interacted with, but always starts with:

<To your astonishment, the Raptor hatching is able to communicate with you.>

Followed by one of the following:

Greetings, <race>. Please do not alarm yourself. I am indeed speaking to you in your native tongue.

My own considerable raptor intelligence has been augmented through a series of experiments. You may refer to me as "Subject Nine," an identity recently bestowed to me by my creators, who are otherwise at the moment occupied or deceased. Perhaps you can render me some assistance?

Subject Nine (spelled "Subject 9") appears as a legendary card in The Boomsday Project expansion for Hearthstone. In the lore of the expansion, Nine ended up in Boom Labs after departing Azshara and received a number of robotic body enhancements. While she received some help from Dr. Boom and the other scientists at the lab, she was ultimately the genius behind her own "evolution".[1][2] 9's flavor text reads: "The original clever girl."