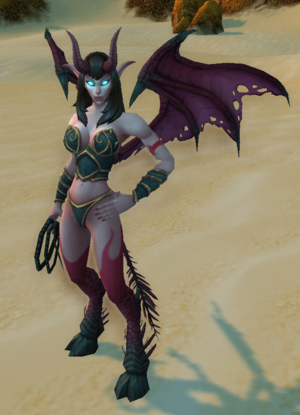 The Succubus is the third demonic minion available to the warlock, summoned through the

The succubus deals melee range Physical and Shadow damage with her whip, can cast

[Lesser Invisibility] on herself, and most iconically of all uses

The succubus can deal more damage than an Imp and can continue to attack if she runs out of energy, but cannot take as much damage as a Voidwalker. The Succubus also cannot hold aggro as well as the Voidwalker. Her armor would be rated as "Medium" compared to the Voidwalker, and she has the same amount of health as the Felhunter; less than the Voidwalker but more than the Imp.

The succubus possesses several abilities in addition to her melee attack:

[Demonic Empowerment]: Increases the Succubus' health by 20%, its Haste by 50% and its damage dealt for 12 seconds.

Voiceovers when ordered to attack:

Voiceovers when ordered to cast a spell: