For the in-game items, see

[Sulfuras, Hand of Ragnaros] and 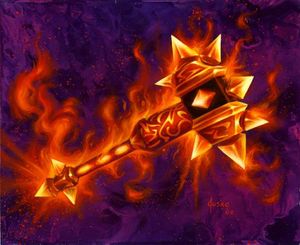 Hand of Ragnaros in the TCG. 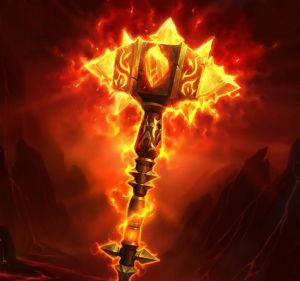 The Extinguished Hand in the TCG. 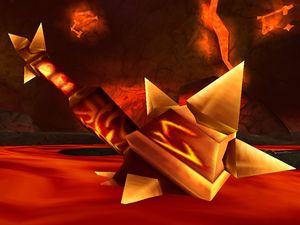 Sulfuras in the Molten Core.

Sulfuras is the legendary hammer of the Fire Lord, Ragnaros. It is an enormous mace of flaming red elementium.[1]

Sulfuras is the mighty weapon of Ragnaros the Firelord. The weapon never leaves his grasp. It is composed of flaming red elementium and etched from end to end with intricate runes that seem to move like flowing lava across the weapons surface. Sulfuras is covered with many vicious pikes of varying sizes, each white hot and surrounded by the distortion of shimmering heat.

When a creature is slain by Sulfuras, its body is consumed by intense flame and effectively disintegrated, leaving behind only a pile of ash. The heat and pressure of this effect solidifies the ash into a hard, dark, crystal. This crystal is known as an Eye of Sulfuras and is used by Ragnaros' followers in ancient rituals or to craft special weapons such as sulfuron hammers.

Sulfuras is incredibly massive. Far too massive, in fact, for most mortals to even dream of wielding, even if they could somehow defeat the elemental Firelord. However, fanatical followers of Ragnaros found a way to craft hammers in its image. Each requires an Eye of Sulfuras, and these lesser weapons are known as sulfuron hammers. A sulfuron hammer appears to be a smaller version of Sulfuras. It is a spiked, flaming red warhammer. The hammer is crafted entirely from elementium, with an Eye of Sulfuras embedded deep in the hammer’s head.[2]

Smaller versions of Sulfuras (suitable for mortals to wield) are available in World of Warcraft.

The Hand of Ragnaros

[Sulfuras, Hand of Ragnaros] is a legendary weapon for level 60 characters (item level 80). It is created by combining a

[Sulfuron Hammer] (crafted by a blacksmith) with an

[Eye of Sulfuras] (which drops from Ragnaros in the Molten Core).

[Sulfuras, the Extinguished Hand] is an epic weapon for level 85 characters. It drops from Ragnaros in the Firelands.