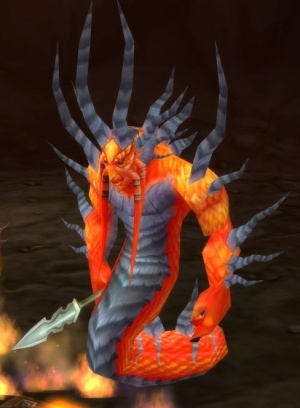 Among the most favored of the flamewakers, Sulfuron Harbinger is the terrifying herald of Ragnaros himself. From the infernal depths of the Molten Core, the Harbinger commands Ambassador Flamelash and the other lesser flamewakers in the outside world. Sulfuron Harbinger answers only to Executus and guards the rune of Koro, one of several runes that empower the Firelord's servants. Sulfuron Harbinger keeps Shazzrah in particular under close watch, believing that Shazzrah seeks to betray Ragnaros. Flanked by four of the Firelord's most fervid priests, the Harbinger prepares for the day when the elemental lord of fire claims the world of Azeroth for his own.[1]

Sulfuron Harbinger is a Flamewaker boss with four Flamewaker Priest guards watching over the Rune of Koro.

The guards can have their spells interrupted so warriors and rogues should be kicking and shield bashing. There will need to be 5 tanks, one for Sulfuron Harbinger and one for each guard. Mortal strike will also help ensure that if they get a heal off it will be reduced.

The first approach is to have the four guards separated into different corners of the room, while the DPS goes from one guard to another until they are all down and then to focus on Sulfuron Harbinger. This strategy, however, requires five strong tanks and the healers to keep them up.

The second approach requires that the guards are all tanked in the same place and one at a time they are led away to be destroyed by the DPS. This can be an easier strategy because the tanks can share healers if one goes down or runs out of mana.

The last approach is to herd all guards in one spot and hit them with massive AoE from mages/warlocks. Whenever health of any one of the guards falls below 20%, all DPS is focused on him, hoping that he dies before other guards have a chance to heal him. This approach depends on a lot of firepower, and it will take longer time for guards to die, but it is easy to implement.

The magic debuffs from the guards are much worse than the melee damage, and will generally target the off-tanks and their healers. Dispelling these debuffs should be absolute priority for Priests for Horde, or Paladins for Alliance. Prayer of Shadow Resistance on tanks and healers helps a lot. Fire resist totems / auras also help.