Not to be confused with Sulfuron Spire. 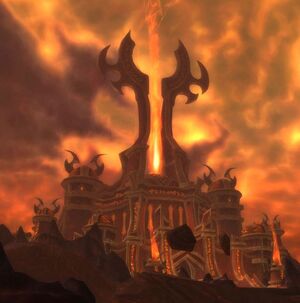 Sulfuron Keep is the fortress-sanctum of Ragnaros, located deep within the Firelands. After his defeat in the Molten Core of Blackrock Mountain, Ragnaros was banished back to the Elemental Plane, but re-emerged at Mount Hyjal during the Cataclysm to burn the World Tree Nordrassil to ash. The Guardians of Hyjal, aided by mortal heroes, forced him back into the Firelands, where they must venture for their final confrontation with the Firelord.

The way into the keep is blocked until the defeat of Ragnaros' champions on the "mainland" of the Firelands, ending with Baleroc the Gatekeeper, who controls the bridge across the fiery "moat" that bars the way.

In the center of a vast lake of fire in the Elemental Plane stands Sulfuron Keep, the home of Ragnaros the Firelord. Until comparatively recently, he ruled his underground land with an iron fist. Three hundred years ago, he was summoned to fight in the dwarven civil war known as the War of the Three Hammers. This reckless act sundered the Redridge Mountains and created Blackrock Spire. Now, in a greatly weakened state, he lies at the bottom of that volcano on Azeroth, striving to find a way home. Meanwhile, in Sulfuron Keep and elsewhere across the Firelands, his elemental princes battle constantly for dominance.[1]