For the charger on the Broken Shore, see Thalassian Charger (NPC).

The mighty charger serves as the steed for all those who serve the Light.[1] 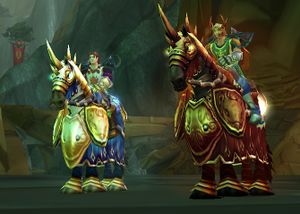 A human and blood elf paladin on their chargers, showing the differences side-by-side 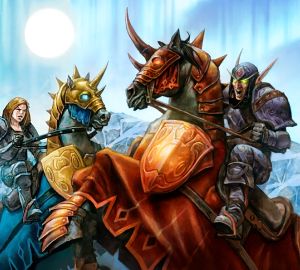 The Alliance and Horde charger in the TCG

Basking in the power of M'uru has strengthened its will.

Differences between Alliance and Horde

Humans receive a charger with blue livery and gold-plated armor, and exudes a golden aura. However, the blood elf charger has red livery, with what appears to be brass armor and a red aura. 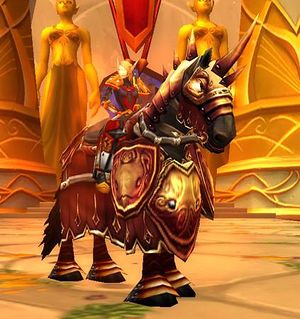 Originally, the Charger mount required the completion of an epic quest chain in order to obtain the rank of Master in the Blood Knights. In patch 2.4.0 the mount was added to class trainers; the quest chain remained available for those who still wanted to complete it until patch 4.0.1, when it was removed entirely.