Summon Warhorse is a type of horse used by a human or dwarf paladin as a mount. It is learned automatically at level 20, and increases movement speed by 60%. The epic mount for paladins is called

Since the mount system revamp in patch 1.12.1, the paladin will obtain Apprentice riding skill upon getting the Summon Warhorse spell from the trainer. Since patch 3.2.0, the spell no longer needs mana to summon the warhorse.

The Alliance warhorse is white and has a blue and silver livery, the blood elf mount is black and has a red and brass livery.

Previously, Dwarf and Human Paladins obtained the spell through a quest called

[40] The Tome of Nobility. This quest consisted of speaking with Duthorian Rall in Stormwind's Cathedral Square. In Burning Crusade, blood elf paladins obtained their warhorse through a quest called

[40] The Thalassian Warhorse, which consisted in speaking with Knight-Lord Bloodvalor in Silvermoon's Farstriders' Square. This was changed shortly after the release of Burning Crusade when the spell was added as a learnable spell from the paladin trainer. This was presumably to stop the complaints of paladins getting a free mount. 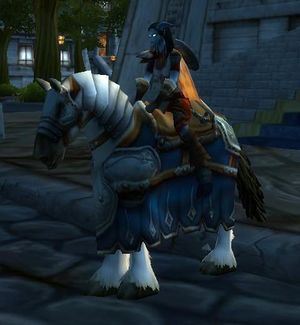 Alliance Warhorse (note: the screenshot was taken before draenei paladins got their own mount)

Was a level 40 spell, attainable by a quest.