Defeat Summoner Kanthin at Manaforge Duro, on the island to the north of Sunfury Hold, and reclaim the Stone of Glacius from him. When you have obtained the stone, use Archmage Vargoth's Staff to contact the archmage.

If you lose Archmage Vargoth's Staff, speak to Ravandwyr at Area 52 to receive a replacement.

The next thing we must do is reclaim my familiar, Glacius, from the blood elf summoner who holds it captive. Summoner Kanthin was one of the most senior magisters in the force Kael'thas sent to decimate Kirin'Var. It's only natural that he would claim my familiar as a kind of trophy.

I'm certain that Kanthin, fool that he is, has tried to compel Glacius to serve him. My scrying has revealed that Kanthin is now stationed at 'Manaforge Duro,' if that terminology has any meaning for you.

Have you secured the Stone of Glacius?

<You're not sure whether it's just distortion, or the archmage really is smiling.>

With the last of my possessions restored, I have everything I need to break through Kael'thas's magic. I'll begin working the spell right away.

Though not part of the chain,

[69] Finding the Keymaster follows the history.

The name "Glacius" is likely a reference to the Rare fighting game Killer Instinct. One of the fighters in the game is an alien made of ice named "Glacius".

For this quest, you will need to find and kill Summoner Kanthin, who is outside the Manaforge Duo building[59.1, 63.0] 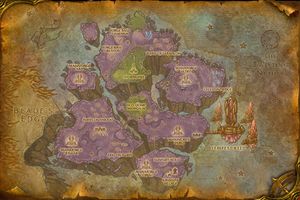