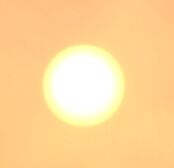 Azeroth has a single sun, as did Draenor, the alternate universe Draenor, Outland and Nathreza in the Twisting Nether.[1]

Azeroth has a yellow sun similar to Earth.

The blood elves and high elves symbolically revere the sun[2] as opposed to the night elves who worship Elune, the goddess of the moon. Blood elves and high elves use the battle cry "Anar'alah belore!" ("By the light of the sun!") or often greet each other with the phrase "Anu belore dela'na" ("The sun guides us") in Thalassian.[3] Most of Quel'Thalas' denizens do not speak of it as a star or as an astronomical phenomena.

The tauren refer to the sun as An'she and considers him to be the right eye of the Earth Mother.[4] The tauen believe that every morning, An'she bleeds, sacrificing part of his light to let the tauren know that dawn is coming. But he doesn't do this alone; the "yeena'e" ("those who herald the dawn" in Taur-ahe) help him.[5] In the wake of the Cataclysm, the order known as the Sunwalkers emerged, channeling the light of An'she as Sunwalkers.

A pandaren legend tells of how long ago, there were five suns that burned brightly in the sky. When the winds blew, their intense heat caused great wildfires. Crops wilted, villages burned, and families wandered endlessly to seek refuge from the flames. Great fires would sweep through the lands of Pandaria until the day that Zao Sunseeker, Champion of the Five Suns, shot a defiant arrow into the sky, bringing down 4 of the 5 suns.[6]

The Sun Priests, an order of tol'vir which can be found in all tol'vir tribes,[7] wield solar magic. The Amathet in particular make heavy use of it. The Sun Priests among the Amathet have twisted the tol'vir's beliefs and weaponized them to justify their crusade.[7]

Before Draenor was torn apart into Outland, it had a red sky and a red sun.[8][9]

On Draenor, the culture of the high arakkoa is heavily centered around the worship of their sun goddess, Rukhmar. Their devices are powered by the sun.[10]

The metal known as solium has the power of Draenor's sun locked within it.[11]

Legend says the Sunfire Kaliri flies into the sun itself when it is ready to die.[12]