Suna Silentstrike is a Shado-Pan rogue and scout. She plays a major role in the Shado-Pan quest chain in Kun-Lai Summit and Townlong Steppes. 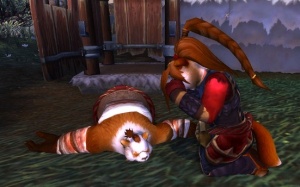 Suna mourns the death of her husband.

When the yaungol invaded Kun-Lai, Lin Silentstrike lead Suna, Ban Bearheart, Lao-Chin the Iron Belly and other Shado-Pan warriors in the defense of the Ox Gate. They enlisted help from adventurers and successfully held the gate. Lin, however, chased the retreating yaungol back to their camp and was taken prisoner by them. Suna was worried about her husband's fate and decided to try save him despite the risks. Ban tried to reason with her but was instead met with open hostility but she agreed to not go in alone. Unfortunately, when forces of the Shado-pan attacked and entered the yaungol camp, Lin had already been stripped and beaten to death.

Suna was devastated and she blamed her husband's death on Ban's decision not to attack immediately. Suna then quickly departed. The severe negative emotions that Suna was experiencing granted the Sha of Hatred the perfect opportunity to possess her, twisting her into a sadistic, vengeful and unreasonable being. Using her new powers, she went to another yaungol camp in the Townlong Steppes and made the yaungol kill each other there, turning the entire camp into a body-strewn and deserted battlefield at Hatred's Vice. Soon after the arrival of the Shado-pan at Hatred's Vice, and with the help of Ban and Yalia Sagewhisper, the adventurers managed to defeat and thereby free Suna from the Sha's control and with her final words, she forgave Ban for everything.