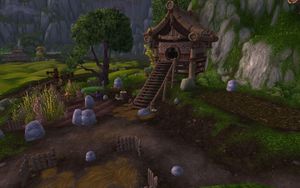 Sunsong Ranch is a farmstead found in western Halfhill, in central Valley of the Four Winds. Inherited by Farmer Yoon, helping him out will give the player access to his farm and a place to grow their own cooking ingredients via phasing.

Farmer Yoon provides all the quests in Sunsong Ranch, and they're all related to the farming mechanic introduced in Mists of Pandaria.

Starting the first quest chain, players are generally at neutral rep with The Tillers. By the last quest in the intro chain, they should finish at friendly standing.

After Harvesting, the first four plots of soil are made available. 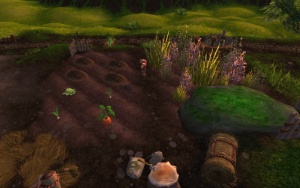 The short quest chain opens up the next four plots of soil, bringing the total up to eight.

The short quest chain opens up the next four pots of soil, bringing the total up to twelve.

Completion of this chain will result in exalted reputation. 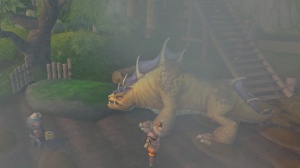 Once hitting Exalted (and completion of

2 additional quests open while waiting on the farm expansion

Once you are exalted and have unlocked all 16 plots, Nana Mudclaw will offer

[90] Inherit the Earth, allowing you to take ownership of the ranch. 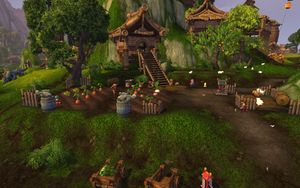 Purchase seeds or seed bags from Merchant Greenfield in Halfhill Market, or they can be randomly found while harvesting crops.

When planting, it is possible to occasionally have a seed instantly grow and be ready to harvest. These are called Bursting crops. 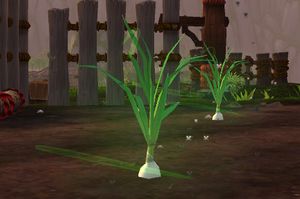 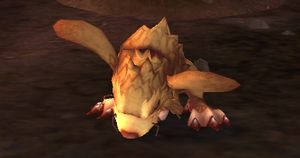 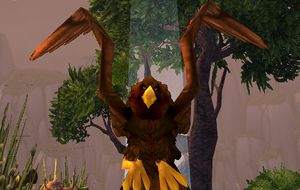 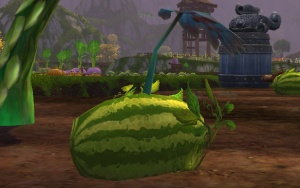 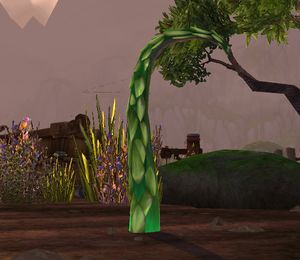 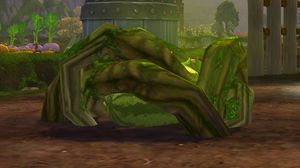 Once planted, crops can be in one of eight states that need to be handled before they can grow unattended. When you ask Farmer Yoon, he will provide the following advice.

Parched crops
Parched crops just need water!
You can use the old rusty watering can my grandpa left here. I keep it right over there by that tree stump, just next to the field.
Infested crops
Infested crops are covered in bugs. Yech!
Grandpa's bug sprayer is on the ground near the field - use it to give those critters a blast of what-for!
Wiggling crops
Wiggling, eh? Well, as Grandpa used to say: carrots don't dance!
Something is trying to pull the veggies right out from under us!
I'm afraid you'll have to kill whatever varmit's down there if you want the crop to have any peace. Heartbreaking, I know, but it's part of the job.
Alluring crops
Well, sometimes veggies get to sprouting SO beautifully, they practically beg to be pilfered.
Grandpa said a keen plainshawk could spot a prize pumpkin better than anyone at the market, and it'd make for it quicker than a... er....
"Quicker than a hozen in heat."
I guess you could say stuff like that back then?
The point is, you'll just have to defend the alluring crops from critters!
Smothered crops1
Smothered crops have a weed budging in on them!
You deal with them just like you deal with a stubborn weed in a plot of soil - elbow grease! Grab that sucker and pull for all you're worth. It'll give eventually.
Wild crops
Wild?! Now that's a surprise! Grandpa used to tell stories about having to wrestle his wild crops into submission.
"Yoonie," he used to say, "don't be afraid to slap your scallions around."
I always thought he was just being gross.
Runty crops
Runty! Hah! Now that's a term I haven't heard in awhile!
Grandpa used to call me that when I refused to get up and go somewhere. He'd grab the nape of my neck and hoist me up "like a runty turnip" he would say.
These crops just need a helping hand getting vertical. Get a firm grip on them and lift.
Tangled crops
Tangleweeds, eh? Nasty little devils. They run deep into the ground some fifteen yards or so - you gotta pull the entire length out if you wanna get rid of it.
Grab the exposed end of the weed and just keep moving away until you see the other end come out. Nothin' more to it than that. 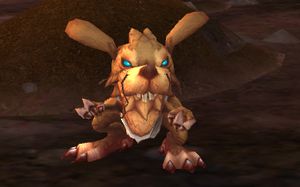 Additionally, there are two states the ground can be in before it can be tilled:

Occupied soil
Sometimes virmen try to burrow up into the soil plots and live there, hoping vegetables will just rain down on them - I think they figure we just put 'em in the ground whole for some reason.
Squatters, that's what Grandpa called them. You gotta put your foot down. Literally. Stomp the ground and root 'em out!
Stubborn weeds
Stubborn weeds!1 They're a constant nuisance, creeping up in the soil and threatening to take over your land.
Before you can till that plot, you need to rip the weed out. There's no trick to it, really - just grab it and pull!
In the words of my grandpa, "you just gotta be more ornery than the weed!"

Finally, plants can grow on their own:

Growing
Now all you have to do is wait! Most crops are ready the day after they start growing.
Aren't we lucky to have land in such a fruitful valley?

1Stubborn weeds start out weak (with 0 stacks) and immediately start to strengthen their grip, up to 10 stacks. Therefore, it's best to jump on them immediately and start pulling. In this way, a weed can be removed with 1-2 tugs.

There are four possible results when harvesting: Ripe, Seed of the Day, Plump and Bursting.

So if the seed of the day is White Turnips you well get five plus two for everything harvested. This means that if you have a plump white turnip you will actually get eight plus the extra two resulting in ten from just one crop.

Once a character has reached exalted status with the Tillers, and unlocked all 16 plots, Nana Mudclaw will offer the quest

[90] Inherit the Earth. With this quest, Farmer Yoon will join the Tillers Council and gift the ranch to the player. This results in the following changes to the ranch: 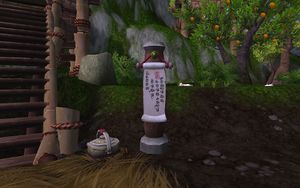 [90] Inherit the Earth and taking ownership of the ranch, a post appears in Farmer Yoon's former spot. It offers work order quests which allow you earn reputation with certain Mists of Pandaria factions by growing and delivering vegetables. You must have unlocked a faction before work orders will be offered for it.

Each quest requires you to plant and harvest 8 seeds of a particular vegetable. Once that quest is completed you will be given a follow-up quest to deliver 40 of that vegetable to a wagon that is waiting near Halfhill Market. You can accept all of the quests at once, but since 8 plots are needed for each one, you can only effectively perform two at a time.

Each work order has two parts. Part I requires planting 8 seeds. Part II requires harvesting crops 8 times and delivering 40 vegetables to the Empty Crate immediately southwest of the plots on the farm, where it's picked up by an NPC. Part II rewards 400 base reputation (before bonuses), 236,000 experience, a

[Lesser Charm of Good Fortune], and 19

You will not receive credit for harvesting crops for Part II until you have finished Part I.

Earlier iterations of Sunsong Ranch had crop outcomes affected by varying weather conditions and seasons, but this was cut in order to reduce complexity.[1]