“It's always darkest before the dawn. The dawn will come... The sun will rise. The balance will shift back to where it should be.”

The Sunwalkers are an order of tauren paladins.[2]

They were founded by Aponi Brightmane after a series of theological discussions with Tahu Sagewind about the importance of balancing out the night elven focus on moon-worship through reverence of light as part of their worship of the Earth Mother. As such, the Sunwalkers are warriors who wield the power of An'she, the sun in tauren mythology, as they did in the past.[3] Although not as numerous as some of the more ancient paladin orders, the Sunwalkers' ways are no less powerful and their members are no less respected.[4] They are the most militant branch of the tauren armies within the Horde.[5] These paladins exist alongside the Seers, tauren priests led by Tahu who also wields the power of An'she.

The emergence of the Sunwalkers is a sign of both troubling times and the unending duty the tauren race has to the Earth Mother, in which hope is their greatest weapon.[citation needed]

Concurrently with the war against the Lich King, Brightmane and Sagewind discussed whether the tauren have overlooked a key aspect of balance, noting the night elves' near-exclusive worship of the moon, known to the tauren as Mu'sha. Yet both Mu'sha and An'she, the sun, are the eyes of the Earth Mother. The pair concluded that the night elves, through their ties to tauren druids, passed on their cultural prejudice against the sun to their tauren students. To properly revere the Earth Mother they hold sacred, the two decided to strive for balance and further explore the powers of the sun, An'she. Brightmane, a warrior who fought on the Icecrown Glacier, remained hopeful that An'she would shine across the sky, and victory would be won by the mortal races, no matter what perils remained.[6]

As Our Fathers Before Us

The Sunwalkers were formed under Aponi Brightmane. Tauren paladins were added as a playable class/race combination.

Sunwalker Dezco led a group of tauren to Pandaria based on visions his people had of the Vale of Eternal Blossoms. They participated in battles against the mantid, mogu, and the Siege of Orgrimmar.

After the fall of Tirion Fordring, Aponi Brightmane and the Sunwalkers joined the Order of the Silver Hand serving its new leader.

During the Battle for Stromgarde, it seems the Silver Hand takes the field under Turalyon in the name of the Alliance. Notably, the Blood Knights face off against them, as do the Sunwalkers,[8] possibly meaning that the two have split away from the Silver Hand. 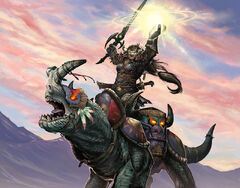 It appears that the two developed new techniques to wield the power of An'she, and the Sunwalkers were founded as a result of this avenue of power, and a new path to revere balance and the Earth Mother. Alternatively, this path was already known (most likely to traditional tauren healers, the Seers), and has simply been rediscovered.