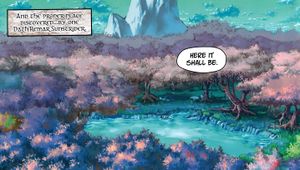 The grove before the Sunwell. 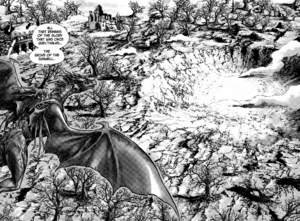 The Sunwell Grove is the location of the Sunwell and the temple (including Magister's Terrace, and the Sunwell Plateau) surrounding it. It is located on the Isle of Quel'Danas. It is said to lie across a small stretch of ocean, on an island north of Silvermoon City.

Millennia before it was a peaceful grove on the island with a small lake in the center. After the Great Sundering, Dath'Remar Sunstrider traveled to the grove with a vial of water from the Well of Eternity. He poured a few drops to begin the transformation, and the whole bottle to complete it. The Sunwell was born. The powers of the well were immediate, and they used them to build a place of honor around the well. The rest of Dath'Remars followers could not resist using the source of magic.[1]

The Sunwell used to be the arcane node that empowered the high elves' magic and sustained their existence. The death knight Arthas defiled the well, using its energies to revive Kel'Thuzad as a lich. The grove remained scarred and burned, like most of Quel'Thalas.

The Sunwell Grove lies across a small stretch of ocean, on an island northeast of Silvermoon. After the Sunwell's energies were defiled by Arthas to ressurect Kel'Thuzad as a lich, the grove was left scarred and burned. Rumors say that the red and green dragonflights have sent agents to the Sunwell to see if it can be reenergized. No one has seen this dragons though, but only terrible creatures, like shadows hurling death from the trees.[2]

The Grove can be seen in The Sunwell Trilogy when the Sunwell was first formed, and after. When the Sunwell exploded during the Scourge invasion during the Third War, it took a section of the forest with it, though the grove and the Terrace and Temple surrounding it can be seen again after Anveena returns to the well. In the trailer for Patch 2.4, it shows the Sunwell was once in an open forest. As stated in Lands of Conflict, the Scourge left the grove scarred and burned. No grove can be seen near the Sunwell Plateau in World of Warcraft. It it may be related to scale issues, or the Plateau was built over top of the grove. If the latter, the damage to the building is unexplained, unless the Dead Scar and remaining Scourge decayed it.