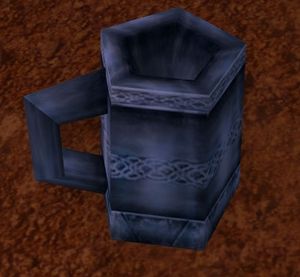 The Super Brew Stein is a gnome sized mug that randomly appears during the Dark Iron dwarf attacks of the Brewfest holiday.

When walked over you gain a powerful whirlwind chucking buff, Drunken Master, that stuns any and all dark iron dwarves you go through. They become sitting ducks that other players can then pick off, one by one.

If you wish to help out defenders without getting too involved, you can ride over the Super Brew Steins while mounted! Players will not be dismounted when they do. Using a mount with a 'tall footprint' such as gnome Mechanostrider mounts, troll Raptor mounts or blood elf Hawkstrider mounts should allow you to view the red trail easier. You will gain the Drunken Master buff while being able to speed around on a mount. Being mounted will also let you get to the Steins much faster, and allow other players to focus on defense.

It used to be that you could sometimes see the mount 'slide' instead of running while buffed; this is perhaps because the event designers did not forsee that the Steins could be used while mounted.

No object ID specified. Please edit this article and add it.