[Barrel of Fish] or

"But you . . . remind me of my younger days; ready to take on the world with a sword in one hand and a skillet in the other." —The Rokk

The Rokk is trying to invent something to spice up his life.

In order to complete this quest, you must have Cooking skill of at least 275, cook up two

[Crunchy Serpent] and be next to a fresh corpse of an 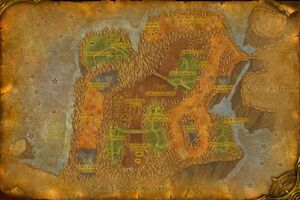 which requires flying or a Warlock

The Rokk in Lower City has asked you to cook up some Demon Broiled Surprise using his cooking pot. Return to him when it's done.

I'm trying to invent something with some real zing. But to be honest, I'm more of an idea goblin these days. I've lost my sense of adventure.

But you... remind me of my younger days; ready to take on the world with a sword in one hand and a skillet in the other.

I want you to take my beloved cooking pot and head out to Blade's Edge. Throw in some shortribs and crunchy serpent--already cooked for extra flavor--and broil it over an abyssal's corpse, the only thing hot enough to do the trick.

If you read the tooltip for the Cooking Pot the Rokk gives you, it says that to make Demon Broiled Surprise you need 2x

[Crunchy Serpent]. Both of these items are created with the cooking skill and are not soulbound, so you can prepare them in advance or purchase them from another player.

Abyssal Flamebringer, which are the red infernal-like demons at Forge Camp: Terror in the southern part of the Ogri'la plateau. It does not need to be the corpse of one that you killed, you may use the corpse of one killed by another player.

Any luck with my little experiment?

<The Rokk takes a sip of the concoction and his face twists into a bizarre mask of pain and delight.>

Sweet A'dal that's good! A cook with your potential shouldn't be without his proper materials. Take some of my extra stock and make me proud.

Either quest reward contains random raw food (fish or meat) and might also include one of the following recipes: