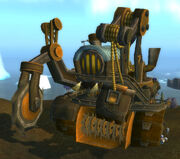 The Venture Company built with the blueprints of Gerenzo Wrenchwhistle an enormous woodcutting machine called Super Reaper 6000. Sputtervalve hearing about this new invention and wanting it for himself, hired Ziz Fizziks soon after being kicked from Gerenzo's operation, to acquire the blueprints. After accomplishing this task, Ziz had the blueprints sent to Sputtervalve, where he began building and selling new Super Reapers to the Horde.

Many of these machines, belonging to the Venture Company and Horde alike, are found all around Azeroth.