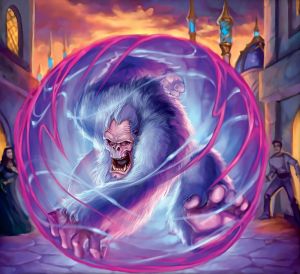 Super Simian Sphere is a toy that, upon use, will transform you into a gorilla surrounded by a purple sphere for 5 minutes.

This item is a Northrend World drop.

The Super Simian Sphere is a reference to Super Monkey Ball, a Sega franchise of video games (multi-platform) in which the player tries to get through various levels controlling a monkey in a ball. Some say it may be a reference to Dragon Ball Z, but this is not so. The items name in German is "Super Sai'ansphäre" but not as a reference to DBZ, but because the word Sai'an is a reference to the German word that means simian. When taking it word for word, Super Simian Sphere and Super Monkey Ball makes much more sense as each word is a synonym for its counterpart therefore making it the most likely reference. Additionally, DBZ super saiyans have nothing to do with balls themselves, although "dragon balls" are part of the series and the word saiyan is just an anagram for the Japanese word for vegetable and doesn't have anything to do with simians, although saiyans do turn into giant apes.

A blue post surfaced eventually after this dispute gained popularity. Ghostcrawler stated, "You guys usually pick up on our little pop culture references right away, but the community seems torn on this one. I will go ahead and lay this to rest and tell you that the Super Simian Sphere is indeed a reference to Super Monkey Ball the video game only. I'll admit you guys have some good points on how it could reference the Dragon Ball series but that was not our intention. Just line up the words, Super Simian Sphere and Super Monkey Ball, it's simple and a much better fit than trying to justify it being about Dragon Ball, but hey, that's the WoW community for you, always finding new ways to do things with stuff the developers never originally intended!"[citation needed]