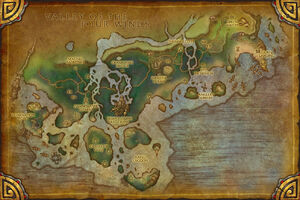 The Horde decided to put goblins in charge of their logistics. And where you have goblins, you have carelessly placed explosives.

Scouts have reported that they have their supplies in carts that also contain Demolisher ammunition. Look at those crates the wrong way, and they'll blow sky high.

With enough Horde resources destroyed, we'll put a time limit on their attack and save lives. So go and take out those carts!

Blow those carts back to Orgrimmar!

Without those supplies, they won't be able to support bringing more warriors in the fight. If they can't bring in more warriors, we have a great shot at holding out.

For today, at least.

Pick up the other dailies at Lion's Landing before heading out.

Head northwest along the beach to Sparkrocket Outpost. Domination Point Supply Carts have a trivial amount of health compared to standard level 90 mobs. Destroy them and revel in the destruction.