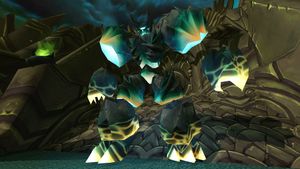 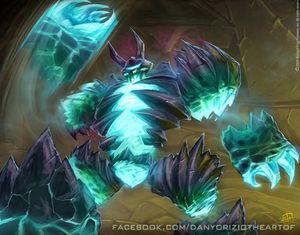 Supremus is the second boss in Black Temple. The fight is a battle for survival. After dropping this boss, the next four bosses (Shade of Akama, Teron Gorefiend, Reliquary of Souls and Gurtogg Bloodboil) can be killed in any order.

The gatekeeper Supremus cycles between striking a primary target while creating rivers of fel flame, and fixating on random players while littering the area with volcanic geysers.

Any standard raid composition will do. One main tank and at least one off tank with high health are needed. 2-3 healers should be on the main tank, 2 healers on the off tank(s), and the other healers on the raid.

No special resistance gear is required, although fire damage from the volcanoes is resistible. As the enrage timer is generous, some guilds may find it useful to stack fire resistance should their primary difficulty be people dying in volcanoes.

During this phase, the fight is basic tank and spank. Raid members must move to avoid the molten flames.

In order to absorb the hateful strikes, at least one off tank (better two) should stay in melee range at all times. Since the hateful strikes can occur irregularly (and sometimes in rather quick succession), the healers must be alert and quickly bring up all tanks. The main tank should have the highest health, because if one of the off-tanks has higher base HP, it's possible that Supremus ignores that off-tank and hits someone else with a hateful strike instead.

As of 2.4, the hitbox of Supremus is larger than his melee range, thus melee damage dealers not designated as off tanks can hit him from outside his melee range, and be that way safe from all hateful strikes. This also increases safety from molten flames. The designated off tanks should stand closer to Supremus, to make sure they're eligible targets for hurtful strikes. The OTs should stand away from the other melee classes, so that Supremus must turn to deal a hateful strike.

After 60 seconds, Supremus switches to phase 2. Melee DPS needs to run away from Supremus a few seconds before the start of phase 2 to avoid being too close in case they are the first focus of Supremus' Gaze.

Similar to Thaladred the Darkener at Kael'thas, Supremus sets his gaze on a random raid member and walks toward them at about 90% of normal run speed. If he catches his target, he melees it which usually means a one-hit kill on most raid members.

If the target of his gaze is within roughly 40 yards, he occasionally hits it with a ranged attack, which deals ~5k physical damage and deals a knockback (usually away from Supremus). If the gaze target is further away than 40 yards, he dashes at about five times the normal run speed until the range is about 20 yards.

There is insufficient room to kite him in a straight line when he's dashing, so the targets should attempt to either stay within 40 yards (to prevent dashing) or not kite him in a linear path.

Besides the Molten Flames (which still spawn during Phase 2), small volcanoes appear randomly on top of people. The volcanoes deal substantial AoE damage even before they're fully visible, it's a good idea not to stay immobile in larger groups for a long time.

[Minor Speed] or one of its variations such as

[Boar's Speed] is recommended for this fight.

Phase 2 continues for 60 seconds, with a gaze change approximately every 10 seconds if the target does not die. The same person can be gazed twice in a row, and totems are valid gaze targets. For unknown reasons, some players may not be valid gaze targets. These players can get a gaze but Supremus switches to a different target within a second.

When kiting Supremus, the large obstructions in the upper part of the area should be avoided. Players must not climb on them, and runners should give them a wide berth because it's possible for him to get stuck on the structures, which causes him to evade (while still spawning volcanoes), which is a very bad state of affairs. It is also possible for him to immediately teleport anyone outside of his ability to reach to his feet, which can be very nasty. This can also happen if he knocks his gaze target up onto a wall. Travel Form and Ghost Wolf are highly recommended in this phase.

There is no aggro table for Phase 2, and an aggro wipe when he switches back to Phase 1. Classes with DoT spells should be careful that their DoTs have finished before the switch back to Phase 1, or they may draw aggro. A paladin tank can be helpful in picking up Supremus after the phase transition, as it is a demon and can be hit by