This article is about about the region in the Broken Isles. For the city, see Suramar City. For the elven kingdom, see Suramar (kingdom).

Once a shining symbol of Highborne society, Suramar never recovered from the trauma of the War of the Ancients. To survive the devastation of the Sundering, the city's inhabitants sealed themselves away from the rest of the world. Isolated for millennia, they had no allies to call upon when the Legion invaded. Now their ancient city, and all of its power, is at the mercy of demons.[1]

Suramar is a max-level zone located in the central Broken Isles.[2] Once a great night elven settlement — though not as glorious as the capital of Zin-Azshari — it was famously the hometown of several important night elves: Illidan Stormrage, his brother Malfurion, their friend Tyrande Whisperwind, and the siblings Jarod and Maiev Shadowsong. Today it is the home of the Nightborne. Suramar is built on ley lines,[3] and arcane coils in the tunnel system running beneath Suramar and the surrounding areas tap into those ley lines' power.[4] Since the creation of the Nightwell, the ley lines have become redundant and the arcane coils abandoned.[5] 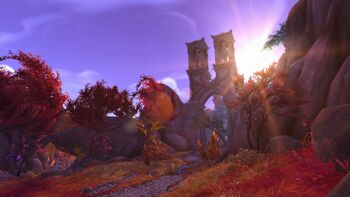 The Ruins of Elune'eth, a massive gate found in Suramar.

Suramar was the location of the Temple of Elune, the central place of worship for the night elves. The high priestess of Elune lived in the temple. The Boughs of Azshara, Izal-Shurah and Arauk-Nashal were also located here.[6]

Just before the War of the Ancients, Broxigar was held captive in Suramar City until he was freed by Malfurion Stormrage. During the war, the Legion's efforts in the city were led by the pit lord Ronokon.[7] The city was attacked and ravaged by the Burning Legion. Suramar was subsequently used by the nathrezim in an experiment to create an army of the undead, an experiment which laid the groundwork for the Scourge ten thousand years later.[8] At some point during the war, the demon lord Sciallax came to Suramar and offered the night elves at the time a powerful artifact in return for their servitude to the Legion.[9]

The Burning Legion attempted to open a second portal besides the one at the Well of Eternity in the Temple of Elune in order to attack the night elves on two fronts. The resident Highborne used the Pillars of Creation to close the portal and put several seals on the temple.[10] The Wild God Ashamane battled Ronokon in Val'sharah just outside Suramar and sacrificed her life to kill him. In doing so, she was able to buy the elves the time they needed to craft a shield around their city.[7]

Most of Suramar was blasted to the bottom of the Great Sea during the Sundering. However, some of it remained above shore in the Broken Isles due to the efforts of the resident Highborne, who crafted a magical shield that kept a section of their city together. This shield would stay up for 10,000 years, as the Highborne believed the world outside of Suramar City had been destroyed. Under their shield they would evolve into the Nightborne, reliant on their source of power, the Nightwell.[11] While the city was shielded, it was "probably next to impossible for normal Nightborne to leave."[12] Much later, dwarves recovered a Highborne Astrolabe from the undersea ruins of Suramar.

The sunken Temple of Elune in Suramar City was later used by the Guardian Aegwynn to hold the physical remains, Jeweled Scepter, and Eye of Sargeras, which led to the building's more familiar designation, the Tomb of Sargeras.

During the Second War, the portion of Suramar containing the Tomb of Sargeras, now known as the Broken Shore, was raised up from the seafloor by Gul'dan.[13][14] A battle was fought there between Maiev Shadowsong's Watchers and Illidan's Naga. Several years later, the alternate Gul'dan was sent by the Burning Legion to act as their ambassador to the Nightborne and their Grand Magistrix, who has pledged herself and her people to the same demons she stood against in defiance of Azshara 10,000 years ago. Not all Nightborne agree with Elisande's decision, though they keep their disagreement a secret. With loyalists and demons marching together in the streets of Suramar, fear and distrust grips other elves' hearts and family turns against family.[15] The flame of the Shal'dorei flickers and heroes must arise to re-ignite it and stir the noble hearts of this once brave night elven group.

Suramar is the most central region in the Broken Isles, making it naturally accessible from almost every other zone.

Roads lead directly into the Suramar from the neighboring regions of Azsuna, Val'sharah, and Stormheim from the west, northwest, and east respectively. A small mountain path even connects from the remote area of Highmountain far to the north near the Moon Guard Stronghold.

There are three separate neutral flight points located throughout the zone: 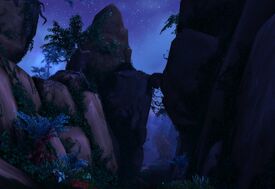 The winding canyons of Anora Hollow.

Suramar is an ancient land, much like the other regions of the Broken Isles. It is strewn with lush and colorful flora, covering almost every cliff and crevice. Ancient Highborne towns cover much of the landscape, now inhabited by fouler creatures. The zone is incredibly diverse, featuring many distinguishable regions.

The southern portion of Suramar holds its most recognizable feature, Suramar City. Almost all of the roads in Suramar lead here, as it was once the center of Highborne civilization. Another notable feature to the south is to the west of Suramar City, Felsoul Hold; a rather recent addition to the zone.

The western portion of Suramar is a flat and grassy area, orange and red in color. It holds two large and now abandoned towns - Falanaar and Ambervale. The great Sundering had especially affected this place, collapsing much of Falanaar. A lot of the snowmelt from Highmountain flows through here and into the Sundered Shoals. Another feature is tucked away to the northwest, Moon Guard Stronghold - built against Highmountain in a strategic manner.

In the northern center of Suramar one finds perhaps the most treacherous and difficult to traverse place in the zone. Anora Hollow is a maze-like canyon with many precarious pathways carved throughout. On top of it is the Highborne gravesite, Tel'anor. Tel'anor's city-like fabrication on the cliffs of Anora Hollow is perhaps strategic, to prevent desecration of its heroes' tombs. That hasn't stopped the harpies, though, who have invaded over half of the ruins.

The last major area of Suramar is the Crimson Thicket, found in its easterly portion, near Stormheim. Like its name, the Crimson Thicket is a forest of deep red color, and massive trees. A small path from the forest leads to Azuregale Bay.

Suramar was a great Kaldorei city ten thousand years ago. Some important night elves once called this place home: Tyrande Whisperwind and the brothers Stormrage. The ruins are now a sad reminder of ancient Kaldorei folly. In the center of the ruins, the stumps of two great aspen trees stand side by side. It is strange, since the climate is not right for aspens; and even if a seedling did manage to grow, it would not have had time to reach the girth of these enormous stumps. As some night elves later clarified, in ancient times, a great garden stood at Suramar's center, and at the center of this garden stood the fabled Boughs of Azshara. Now, these petriﬁed stumps are all that remain.[16]

As capital of the Kaldorei

Suramar during the War of the Ancients.

In some RPG books, Zin-Azshari was seemingly replaced by Suramar.

Suramar was the ancient Kaldorei capital.[17] In the time of Queen Azshara, the religious community of Suramar was a complicated structure intimately intertwined with the arcane community and involving nearly everyone in the city.[18] The great arcane academies of Suramar trained entire generations of mages.[19]

Once a gleaming city of polished wood and marble, of silken banners and graceful spires, Suramar was torn asunder by the War of the Ancients and was being battled over during the final stages of the war. Queen Azshara and her Highborne followers climbed to the heights of power when their heedless studies of magic brought the Burning Legion to Azeroth. The Kaldorei and the ancients were making one last attempt to prevent the Highborne from leaping over the brink of destruction. A portion of Suramar, the temple district, was located near the Well of Eternity. The city was also the location of the Eternal Palace where Queen Azshara lived.[20]

The ruins of Suramar in The Frozen Throne used the "sunken ruins" tileset. It is never explained why the kaldorei city of Suramar has the statuary and motifs of a seaside civilization when the city was several thousand miles inland. Moreover, the distance between Suramar and Zin-Azshari (in the War of the Ancients novels) was implied at being between a third to a half the distance from the Well of Eternity to Mount Hyjal, while the maps in The Frozen Throne show the Broken Isles to be close to the Maelstrom, and on the opposite side. It is implied in Lands of Mystery that the Broken Isles are being pulled towards the Maelstrom. One could say there might have been a big lake and Suramar was located on its shore.